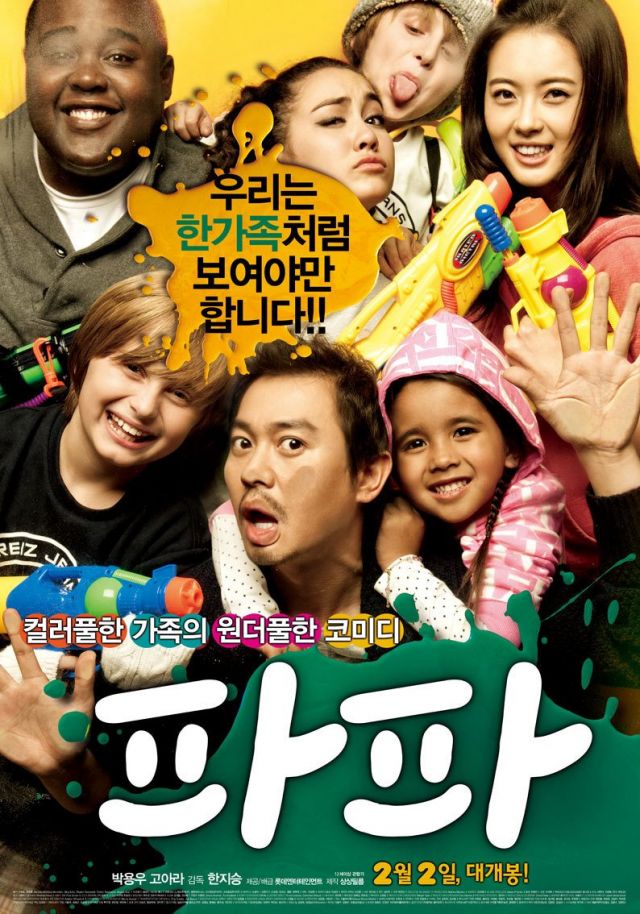 Director: Han Ji-seung ("Venus and Mars" and "Alone in Love")

I flagged this film as soon as I saw the film poster for it a few weeks before its release in Korea. It looked like such an unusual, as well as a highly unlikely film, that bravely nose dives into the, sometimes sticky, issue of multiculturalism in Korean culture. Han Ji-seung's efforts here, as something relatively new and rather bold, unfortunately did not translate into a remarkable performance at the local box office. The film received very little attention, and generally slipped under the radar in terms of admissions. A shame really, because although it's all a little to neat and tidy for my liking, the film itself offers a unique counter-narrative to mainstream Korean cinema as a light-hearted comedy that finds an uncanny middle ground between the Korean comedy genre films we all know and love, and this films irregular inclusion of suburban American culture.

Park Yong-woo plays Kang Sang-man, an musical idol manager who is trying to hunt down a young singer who has seemingly disappeared while in the U.S. As his visa expiry date looms closer, Kang's efforts to find her become increasing desperate. Failure to locate the young star would result in his boss's wraths being released upon him, a fate he tries to dodge buy marrying a Korean-American women in order to be able to extend his stay in the country. Any joy he might have felt at being able to stay in the country is very short live, as a freak highway accident results in the death of his new 'wife.'

Stunned, Kang is forced to reevaluate his position within the U.S as he deals with the police inquiry in the aftermath of the accident. The authorities are about to deport him when they learn that he is, now legally, the father of a multicultural family of six. The women he married for the visa clearly had numerous run-ins with would-be visa seekers, resulting in a large and culturally diverse family that is held together by the old sister June (played by Go Ara).

June is still a miner, but as the oldest she has taken it upon herself to care for family, and when John tries to step in and take over - he is quickly reminded that this is not Korea and his status in the country is dependent on his relationship with his new children-in-law and alien family.

The set-up in "Papa - Movie" is an unlikely one, for sure, but once that hurdle is passed the film offers some solid entertainment in the name of something different and really quite refreshing to see in Korean cinema. As Kang spends more time with the family and each of its members, bonds area formed and then eventually put under new stresses as Kang's old mob-style manager piles on the threats. It's nothing ground-breaking or even surprising, so far as the story and plot are concerned, but the context and play between the cultures makes this one worth the watch.

Multiculturalism in Korean cinema is almost non-existent in any meaningful sense. Illegal immigrants/criminals, the odd foreigner extras, smiling tourists posing in hanboks, and a few English teachers are the extent to which I've seen a non-Korean face in a Korean film in recent viewings. That's probably why I found "Papa - Movie" so refreshing. Korean is one of the most racially homogeneous countries in the world, pair that with its strong sense of national identity and pride, and you get a country that will rarely poke fun at itself for the sake of humor outside its own cultural parameters.

That said, "Papa - Movie" is packed with great cultural comparisons that is helped along by Kang's 'fish-out-of-water' experiences that makes for some really entertaining and funny moments. Even the small things will cause a chuckle or two, such as when Kang asks, out of frustration, why everybody is wearing shoes in the house. Or when he crashed a Korean birthday party with his karaoke skills to dine on Korean food. John is the outsider in all of this, but he is also our protagonist and leads the show. Just like the Korean audience, he is unfit to exist in this world is his current state. Change is required of him, and through the course of the film that is exactly what we see happen as meaningful bonds are formed and relationships are forged with his new family.

The film does take sharp note of some of the differences between American life and that of the average Korean, but it also builds on some of the similarities too. In an attempt to save his tail, John tries to take advantage of Sue's extraordinary singing/dancing ability by entering her into an American idol contest. Idol shows such as "American Idols" and "SuperStar K" are definitely where these two nations can find common ground, and it's inclusion as a narrative hinge works well to bridge the cultural divide between the two countries.

I was sad to see this one underperform at the Korea box office, but at the same time I won't argue too strongly with anyone who says the film was formulaic and cliche. However I will chime in on its significance and the importance of context when viewing it. "Reading" this film was tricky because the line between what was Korea and what was America was overlapped and blurred - and that made for a number of humorous and interesting moments. If you're up for something relatively light, I say "relatively" because this is a Korean drama/comedy after all, and a little different but still has a great sense of humor, "Papa - Movie - Movie" is the one to find, as it's not afraid to poke fun where sometimes seriousness can get in the way of a good laugh.