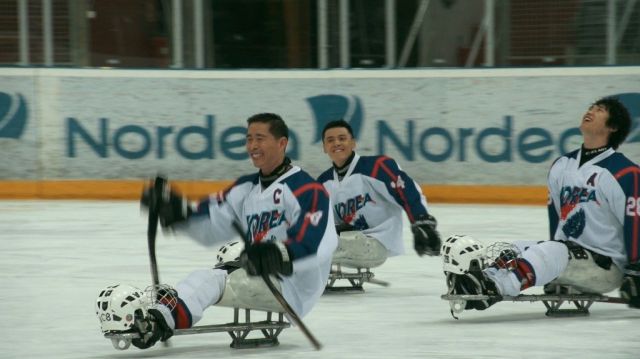 Sledge hockey is a Paralympic sport that's pretty much the same as regular hockey except that the players (who typically do not have functioning legs) move around on sledges propelled by sticks in their hands. It's an exceptionally aggressive sport, even compared to regular hockey, since the athletes are constantly swinging their arms around and moving a lot faster than you'd think would be possible without legs. "Parallel" is the story of the South Korean sledge hockey team and their experience at the 2012 Ice Sledge Hockey World Championship in Norway.

Well, most of it anyway. The single most frustrating aspect of "Parallel" is that, short seventy minute runtime notwithstanding, the final two games of the tournament are not shown. My guess is director Kim Kyung-man ran into legal trouble with whoever owns the broadcasting rights to those games. This problem has apparently not been solved in the three years since "Parallel" first premiered at the Busan International Film Festival.

We are reminded of the time gap with a sequence during the credits about a prviate screening attended by South Korea's first lady ahead of the 2018 Paralympics. Which, naturally, also answers the question of why "Parallel" is only being released now. Sledge hockey is probably the single most distinctive sport of the Paralympics, and the team playing right now is the same one that is featured in the documentary, plus or minus a few members.

That's the first priority of "Parallel" is just to introduce us to the team. None of the members are especially strong characters, but they're all endearingly human. There's the guy who just got a new girlfriend and is constantly texting her. Another one remains obsessed with skydiving, even though skydiving is how he lost his legs. Another one just lives at a rural home with his mom. Multiple members are family men. One even used a sledge to move around the house, which struck me as extremely efficient for a guy with the upper arm strength to pull it off.

And therein lies the second priority of the documentary- to make a point how all of these men are dedicated atheletes who consider their lack of functioning legs as a minimal obstacle to peak physical performance. Even setting aside the results of the tournament, these are some fairly impressive men. The highlight reel we get of their first three games is pumped with high adrenaline action, and we can see how serious the team is in spite of the obvious lack of support. Observe the lack of fans in the stadium, and the shoddy condition of the South Korean team's equipment.

Ah, and that gets us to the documentary's third priority. It emphasizes that sledge hockey is a very important sport whose athletes deserve better. The release of "Parallel" very intentionally coincides with the now concluded Paralympics in Pyeongchang, which were prominently advertised in South Korea alongside the Olympics. And evidently the sledge hockey team has gotten the support they were so desperate for back in 2012, going by their third place win yesterday.

"Parallel" is directed by Kim Kyung-man.