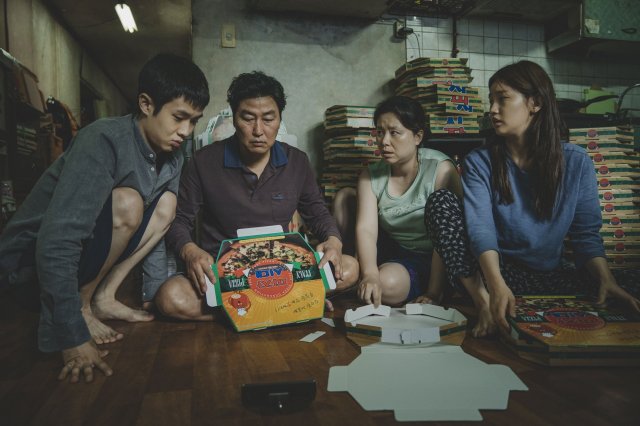 The term "Parasite" is an inherently disgusting one. It calls to mind a lower organism that sucks off the life energy of a superior one. But biologically speaking parasites aren't so bad. In fact, they often have symbiotic relationships with their hosts, providing useful benefits in exchange for resources the host isn't even using. So it is with the lower class family in "Parasite" who worm themselves into the lives of a wealthy family so as to escape the drudgery that comes with having to fold pizza boxes for a living.

They don't actually see it as drudgery, amusingly enough. What makes the central family of four so charming is that they continually see everything as a hustle. By living cheaply, they validate their lifestyles and prove that they are smarter and more resourceful than their supposed betters. For them, living high means exchanging domestic budget brand FiLite beer for fancy Sapporo imports. Everything is a clandestine scheme to this family, who only care about the material consequences of being found out rather than the spiritual ones.

Their inevitably crashing headfirst into spiritual consequences is of course the main conflict although not in the form you're likely expecting. "Parasite" is not the least bit judgmental about its poor characters. Weirdly enough it's not even particularly judgmental about their wealthy employers. At worst they're just not very smart, which is why they are so easily made the oblivious victims of the scam.

But can they really be victims when they're so happy? That's one of the more intriguing philosophical questions posed here. When we first meet Yeon-gyo (played by Cho Yeo-jeong), the lady of the house, she seems like a pathetic alcoholic housewife. This turns out to just be a misleading first assumption. It's a good trope to play around with. After all, there's something inherently dishonest about acting like rich people have to be unhappy, when the whole reason anyone wants money is for peace of mind.

Well, maybe that and just the luxury of having a little modest fun every once in awile. But just as a matter of personal dignity, enough personal wealth to avoid complete destruction by a single rainy day seems like basic human decency. That's the mindset within which "Parasite" enters its delightfully perverse final act, with its charmingly modest lawn party that comes off as rapacious extravagance solely because the previous scenes had contained completely preventable setpieces of massive grotesque destruction.

Da-song (played by Jung Hyun-joon) provides further ironic imagery along these lines, with his childish enjoyment of boy scout outdoorsmanship. His parents, too, by extension, value and fetishize survivalism. Yet all the while, they are in close proximity with actual survivors, never realizing the true secret to the philosophy. Survivalism isn't about making it on your own. It's about working as part of a team, and leeching off of others as necessary. It ain't pretty, but then that's why all the characters in "Parasite" rich and poor alike have to dress it up as something more noble.