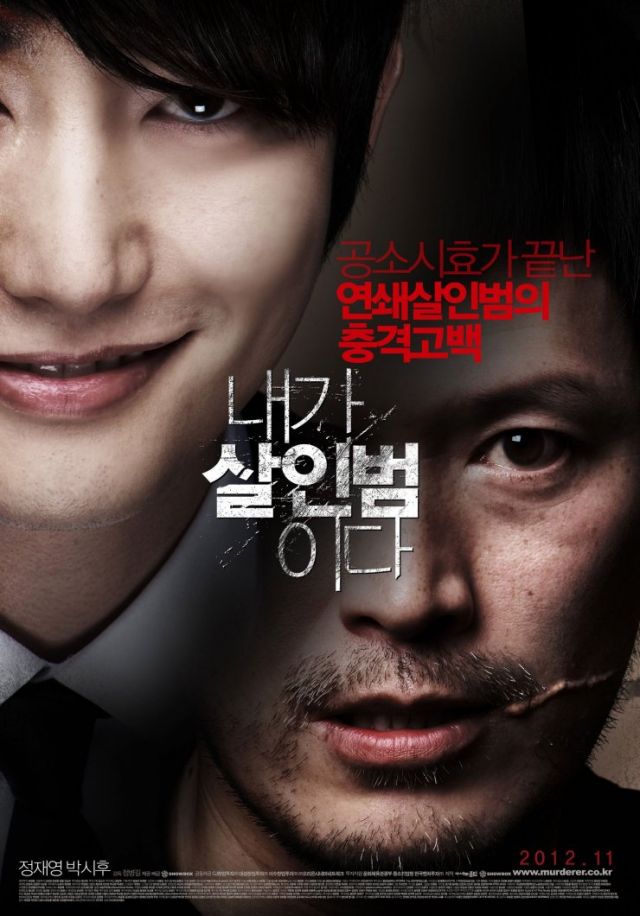 Earlier this month the Korean Police concluded its investigation into the rape charges made against the Korean actor Park Si-hoo. In which they advised that charges be made against the Korean idol. The K-drama star denies the allegations against him by the trainee actress, and the public will have to wait on a verdict to find out if Park will be following a similar fate of the recently convicted TV personality Koh Young-wook, who will serve five years for raping and sexually assaulting minors.

Park has been involved in a number of Korea dramas ("Cheongdam-dong Alice", "The Princess' Man", and "Queen of Reversals" to name a few recent ones) and has only appeared in one actual film-"Confession of Murder". It made not be a murder charge against him in real life but the film is fascinating nonetheless as the disturbing irony of its premise was enough for me to watch Park first, and perhaps last, film performance.

Jung Byung-gil's "Confession of Murder" is a fantastically mind-numbing, yet strangely engrossing, experience. What if, after the statue of limitations on a murder case expires, a serial killer held a press conference to present a book on the subject? The law would be unable to touch him, but how would the families of deceased feel? And what about the detective who painfully pursued this megalomaniac? These are some of questions the film's director has asked, for better or worse, in this his third feature film. Just as many die-hard fans many refuse to believe the allegations against the gorgeous smooth face of Park, so to do the media and public in "Confession of Murder" refuse to forsake him. Lee Doo-seok (Park's character) seems anything but a serial killer with his perfection facial features, chiselled body and alluring smile, but that is exactly what he claims to be in the film, all the while grinning smugly as his book flies off the shelves.

And while Lee is basking in the warped and superficial gaze of the media eye, his rival, detective Choi played by Jung Jae-young, watches on in disgust at the man who left him scared and bloody the last time they meet. As the media hounds him for comments and quotes, the stubborn and resilient detective tries to disprove and shame Lee's unabashed re-entry into the limelight.

It's a sick fantasy to imagine that, if Park was found to be guilty, his fans would still be in awe of him as Lee's fans are of him in the film. In one scene a group of high school girls with loudspeakers chant his name and defend his claim to be the murders, as if his killings are somehow apart of his allure, along with his flawless face and physical prowess of course. How far are fans and the media willing to got to protect their idols I wonder, and in "Confession of Murder" Jeong takes us there.

Fascination is what is driving the media and the public's interest in the case, as yet another idol may just slip off his high stool and tumble-but will they catch him as he does? I would imagine that among Park's adoring young fans there will no doubt be a few aspiring singers and actresses that could project themselves into the place his mysterious accuser, the unknown woman whom seems to embody the fantasy such aesthetically pleasing male idols tend to attract. Violated those fantasies have been though, and some might be compelled to blindly defend the man regardless of the fact or fiction that emerges from the case.

In "Confession of Murder" Lee is all too smug in his declaration of murder and sin. But it is in that very admittance that he finds the fuel to sell his books and prompt himself. The public know and believe him to be the killer, yet they persist in their idolising and worship of him (with but a few eggs been thrown and, of course, the victim's families expressing their disapproval); they even defend his claim to evil when it is suggested that he may be 'innocent' of the crimes or, rather, guilty of fraud.

The film places the debate firmly in the spotlight, and much of film's gruelling screen time (119 minutes going on 140) is focused on the main character's presence within that lime light. As with many Korean films, the 'law' has been heavily subverted here, even completely nullified. In addition to the legal parameters of the statue of limitations, the police are represented as props and possess very little power amidst the surrounding media circus.

Similarly, it would seem that all the Korean police can do with Park's case is suggest to the prosecution that charges be made (rather than making them themselves?), acting like a weak intermediary that serves no specific purpose other than a fuzzy and vague sense of due course. It would appear that 'justice' may just come in the form of the media and public's reaction to case, rather than from a righteous sense of faith attached to the law and its enactment.

As Park's case continues to be on the lips of fans and the media, it seemed strangely appropriate to consider this film. Its logic and progression is heavily tripped-up by mind-bending inconsistencies and it seems to embody the very definition of cinema's 'suspension of disbelief' at work. It is also, surprisingly,  a sickeningly captivating affair and despite its nonsensical nature, viewers will be memorized throughout as the need-to-know-more infects and dominants the senses.

It seems that we are unable to take our eyes off either Park's real case or Lee's showmanship and allure in this film. And while the film does provide a very tidy, but still not entirely convincing, dénouement; I suspect that the reality that mirrors this piece of fiction will be one more shaded and less cathartic.