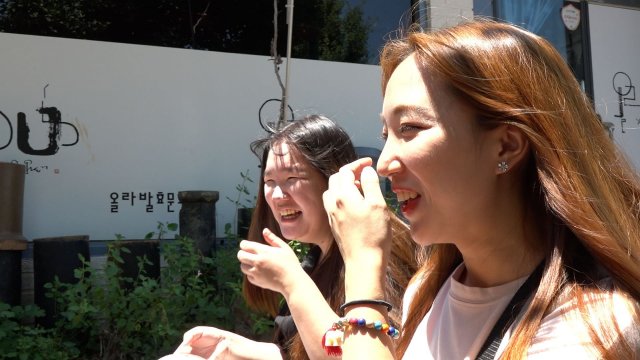 Elancia was a massively multiplayer online role playing game released in 1999 by Nexon. If you haven't heard of it, well, that's not surprising. Even in South Korea Elancia is pretty obscure. In fact, director Park Yun-jin opens the movie up with clips of people exclaiming just how terrible this game is, and how nobody in the modern day in their right mind would play it. Which naturally begs the question of why people, director Park Yun-jin among them, continue to play Elancia when better MMORPGs are available.

The metaphorical explanation for this is surprisingly understated. "People in Elancia" is framed by an explanation of how the 1997 Asian Financial Crisis radically altered the South Korean cultural landscape. We see Park Yun-jin and her various Internet friends describe the relevant stress of growing up in the aughts, when education was everything. With their free time largely gobbled up by cram school, going home and playing Elancia was the main time they could relax.

OK, but then why Elancia and not some other game? Well, it has to do with macros. I'm still not entirely sure what macros are to be honest. They appear to be a very crude form of automated grinding. I emphasize "crude" here because macros are a ridiculously exploitable game mechanic. A person who knows how to use them correctly can effectively level up their character skills (Elancia does not have character levels) to do pretty much anything they want in the proper game.

That last paragraph probably sounded like nonsense if you're not familiar with video game terminology and really, that's appropriate. Most of "People in Elancia" is utter nonsense to people unfamiliar with the MMORPG's gaming culture. The archaic in-game display is almost unreadable, to the point of requiring subtitles. The entire documentary plays off like an elaborate in-joke, which Park Yun-jin attempts to explain to limited avail.

The story is just unavoidably, delightfully weird. This is even more sharply emphasized by the documentary's Korean title, which reads as my big sister Jeon Ji-hyun. This is the handle of the character of Park Yun-jin's best Internet friend. In what is probably the documentary's cutest moment, Park Yun-jin even confessed that her original motivation for making "People in Elancia" was just to meet all of her Internet friends in person. And despite their all being mostly functional adults in the present day, that's still how they prefer to meet is in their crude late nineties computer program.

This sense of community goes so far to extend even to the postscript. The version of "People in Elancia" I saw is actually the third version, following a short film version, a feature length version, and finally, a version featuring scenes wherein Park Yun-jin and her friends negotiate with Nexon directly for desired upgrades, Nexon having taken an interest in their archaic still online legacy MMORPG due to Park Yun-jin's popular run on the festival circuit. The whole situation is utterly preposterous- although I imagine any dedicated member of an obscure online community can probably relate.