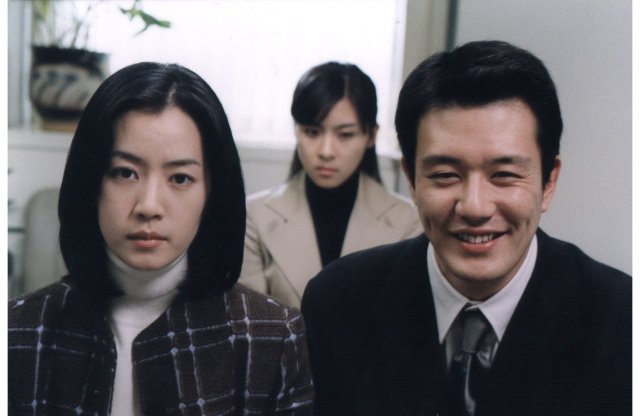 We are introduced to ace reporter Ji-won (played by Ha Ji-won) as she is trapped in an elevator and menaced by an unknown entity through her early-aughts era flip phone. We then flash back to Ji-won discussing the death threats she's received from a recent series about sexual predators. It's oddly appropriate that neither of these plot points actually have very much to do with the rest of the movie, where Ji-won is presented largely as a bystander to a distorted family situation.

In short, Ji-won's best friend Ho-jeong (played by Kim Yoo-mi) and her husband Jang-hoon (played by Choi Woo-je) are having trouble with their five-year-old daughter Yeong-joo (played by Eun Seo-woo) who abruptly starts acting like a weirdly possessive teenager. It's not exactly a spoiler to say that Ji-won was the egg donor for Yeong-joo. This is only because this doesn't actually have very much to do with the story and it could have been easily edited out of the script.

In theory red herrings are good for horror mysteries, since they allow for alternate explanations. But "Phone" takes the idea to such an excessive degree that the first half of the movie just drags on and on until Ji-won finally runs into a clue that leads in the general direction of her phone's strange behavior. Matters further aren't helped by Kim Yoo-mi and Choi Woo-je having terribly wooden performances and almost no real personalities to speak of.

Charitably, this could be read as more misdirection. We could also see it as Ho-jeong and Jang-hoon acting mostly normally making it that much more obvious that something is very wrong with Yeong-joo. Still, none of these people are the main characters, despite their subplot abruptly turning into the main plot by the latter half. Ji-won is only a slight improvement, although even her relevance is mostly lost once it becomes clear the malevolent entity isn't actually coming after her.

"Phone" is a product of its era. The ambience is cheesy and not particularly scary. The technology, backgrounds, and even hairstyles are a firm reminder that the story takes place in a much less fashionable South Korea than the one we're familiar with today. Even the English subtitles are awkward, stilted, and just plain inaccurate. This was common for the low budget international DVD releases of the time period, although the lack of professionalism can be a bit jarring in a modern context.

One of the very first movies added to HanCinema, "Phone" got far just by being a horror story of the Korean New Wave. It was also an early project of Ha Ji-won, and a marked departure from the melodramatic television projects she ultimately became better known for. "Phone" is at best a historical curiousity- which I suppose is as good a reason as any for it to have gotten a rerelease this past July 30th. At present it's not available on South Korean streaming services, though I expect that will change soon. But it's not a movie that's much worth watching in any case.