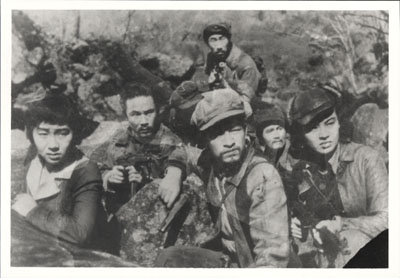 Film historians consider 1955 a very important year for S. Korean cinema, in essence, the beginning of the Golden Age, despite the fact that only 15 films were produced during that year. "Piagol" holds a special position even in such a significant year, although for negative reasons, since it was eventually banned due to its supposedly pro-communist propaganda. The press, audience, and critics criticized the film for reasons that now may seem completely illogical, but just two years after the Korean war and with the hostile moods still strong, mostly instigated by the continuous North Korean guerilla activities, one can only find some logic in the ban, to say the least. The critique focused mostly on two aspects: the fact that no South Korean troops are presented in the film and the humane depiction of the North Korean troops, whom the S. Korean audience were used to see as "faceless" monsters. Let us take things from the beginning though.

The story revolves around a group of communist partisans who cross a mountainous area (Piagol means Pia Valley) just before the armistice between the two countries. Their leader Agari is ruthless in his implementation of the official line and his almost vengeful tactics soon leave the band with just a few members, including two female ones,  the very beautiful and capable Ae-ran and the more "timid" So-joo. The rest of the group includes the skeptical Cheol-soo, who is the second in command, an almost illiterate older man, a young boy, and a few others. After the leadership of North Korea awards Agari a medal for his services, the band is ordered to attack a village that harbors counter-revolutionaries, but also happens to be the young boy's birth place. The mayhem that follows brings up much questioning about the leadership's tactics, while Agari's actions, who forces himself upon So-joo and is turned down by Ae-ran, when he does the same to her (since she seems to be interested in Cheol-soo, who has no interest for her however), bring even more tension to the group. A number of unexplained deaths worsen the situation even more, while Agari tries to keep the group together by becoming even harsher. 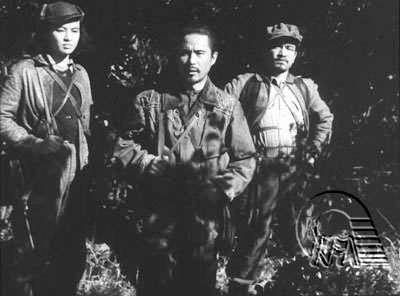 The public and the authorities may have criticized the film for the humanization of the North Korean partisans, but seen in retrospective, the film is anything but pro-communist. The members of the band are portrayed as filled with faults, both as human beings and as soldiers. The love triangle (and the addition of So-joo) is probably the harshest element in that regard, particularly since General Agari is presented as a true satyr, a man who uses his authority to have sex, with the fact that he is eventually turned down by Cheol-soo being another "nail in his coffin". Agari is actually the main source of anti-communist propaganda, since he is portrayed as overly proud, cruel, completely unforgiving, having almost no control over his troops apart from when he kills them, and in essence of being the only one who does not understand the situation. The fact that Ae-ran is portrayed as smarter, more down-to-earth and in essence more loyal, could also be perceived as a kind of mocking towards him.

These two characters are the most memorable in the film, with Lee Ye-chun and Kim Jin-kyu giving excellent performances, respectively, while their antithetical chemistry is one of the best elements of the narrative.

The critique, however, does not stop here. Cheol-soo, who seems to function as a metaphor for communist intellectuals is portrayed as timid, inactive, and constantly lost in thought despite the direness of the situation, an in essence unable to do the slightest thing even when his life is in danger. Furthermore, the practices of the group, and particularly the attack on the village who is ordered by the High Command, also present a propagandistic comment about communist practices, while the fact that many soldiers kill old people with no remorse, since the higher ups deemed them counter-revolutionaries, is probably the harshest comment presented in the film. 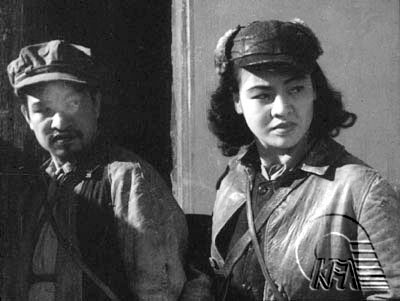 Technically, the film is exceptional. DP Gang Yeong-hwa takes full advantage of the mountainous area to present both the claustrophobic setting the protagonists inhabit and to highlight the few but very impactful action scenes. Of course, due to censorship, most of the violent acts are implied instead of depicted but the fact remains. Furthermore, he also does not neglect portraying the beauties of the area, which form an eloquent antithesis with the events that benefits the narrative immensely. Yang Ju-nam's editing induces the film with a rather slow pace considering its nature, which allows Lee Kang-cheon, though, to analyze his characters and the situation fully. This tactic actually sets the film towards a more art-house path than a mainstream one, although the action and the succession events are not missing.

"Piagol" is a very interesting film, equally competent in its direction, acting and production values, which demands from the viewer, though, to overcome its evident propagandistic purposes in order to fully appreciate it.