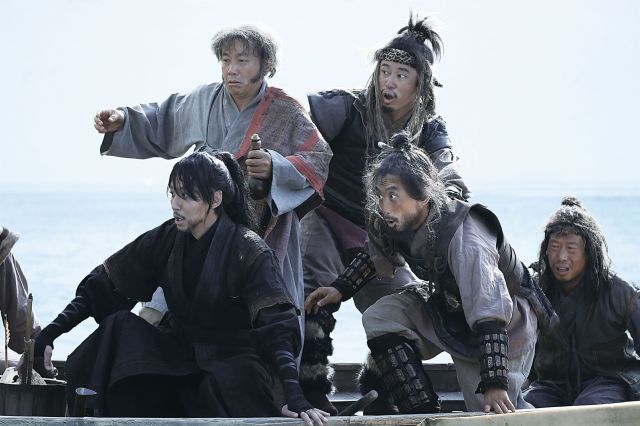 The main characters in "Pirates" don't follow the rules. This is the very first thing we learn about them. We're introduced to Sa-jeong (played by Kim Nam-gil) as a mess ensues from his refusing to obey orders without question. Yeo-wol (played by Son Ye-jin) is a little better about falling into line, but even she has limits. From the very beginning our leads are well-established and sympathetic as characters, even as they're obviously cutthroats who make a living through violent thievery.

From this promising beginning, the movie quickly starts to show off how irrelevant this entire enterprise is. Sa-jeong is the comic relief and Yeo-wol is the serious plot-driven character, yet they share so little screen time together that there isn't even an opportunity for them to showcase the chemistry they showed in "Shark", which is supposedly the whole reason they were cast in the first place.

The other characters aren't much better. Both Sa-jeong and Yeo-wol have antagonists, yet they're given almost no exposition outside of their initial encounters with the protagonists where they didn't even want to do anything all that evil. "Pirates" itself practically acknowledges this by abruptly having them destroy the countryside near the end solely to clearly establish that they're bad dudes who need to be stopped. There's also a late kidnapping that's equally pointless, and only served to remind me of how irrelevant every single plot contrivance is.

Still, "Pirates" is an action comedy, and should be judged on those merits. The action is...all right, I guess. It's nothing amazing, but the lack of amazing aptly showcases how these action setpieces are more out of obligation than because they service the story in any way. One such scene almost totally destroys a large village of presumably innocent unrelated people. I guess destruction is only bad when it's done on purpose and is otherwise funny?

The comedy does work sometimes, mostly through the use of absurd imagery or thwarted expectations. Yet for every good joke we get, there's another squandered opportunity- like how we almost never see anybody make a getaway, even when they're totally surrounded by soldiers. They just reappear a few scenes later unscathed. Of course, on the logistics perpsective, I might as well point out that the pirate ships are apparently more like ninja ships, given their ability to sneak up on people in the vast wide ocean.

"Pirates" is a bloated disappointment. It comes close to the down-to-earth skulduggery that should characterize the genre, but squanders these opportunities by layering more and more characters and plotlines until the whole thing just becomes a mess of conflicts with unsatisfying resolutions. The movie may one day be some fun on cable, since the setpieces and humor would probably go down a lot better in smaller doses where there's not enough time to think about the plot. In the serious critical context, though, "Pirates" is an absolute failure.