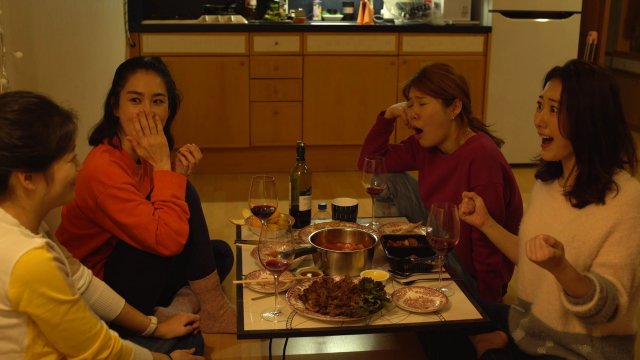 In "Plus Nine Romance" four twenty-nine year old friends take stock of their love lives as they prepare to step into their fourth decade. The interlocked stories that follow detail these women as they try to figure out whether their relationships are worth keeping, discussing their frustrations candidly with each other but often not as effectively with their male partners. Whether the male partners deserve that much consideration, well...your mileage may vary.

Take Hee-joo (played by Jo Han-na-II). She's a flight attendant, and her boyfriend is failing to get a job. Their relationship has the benefit of having persisted for a long time, but has drifted off into complacency and even rudeness. There's no spark, and no real hope of a future, and yet they persist. In execution the story's not that gloomy. Mostly it was just boring, which I realize looking back was part of the point. A relationship doesn't necessarily need romance but it does need at least some reason to exist.

Ga-hee (played by Lee Da-hae-I) does have definite chemistry with her ethnically Korean, culturally American boyfriend, a client of her hedge fund. But they are completely incapable of communicating, with Ga-hee only realizing very belatedly that cultural differences and the language barrier don't explain that much. Her boyfriend just seems to be entirely oblivious to the fact that women like to be reassured of their value and hate being taken for granted. Ultimately, Ga-hee has to come to terms with the fact that whether or not her boyfriend is trying to be hurtful is besides the point if she always feels like garbage when they're not having sex.

Seo-yeon (played by Lee Saet-byul) has the exact opposite problem of her boyfriend always putting so much effort into cheering her up that she starts to interpret his goofball phrasing offensively. That Lee Saet-byul is also the writer/director of "Plus Nine Romance" is interesting, given that she's playing the pettiest character whose love life problems appear to be the most self-inflicted. Oh, she also owns the coffee shop where the four friends hang out.

The final lead, Bo-yeong (played by Kang Na-ri), runs a theater troupe. As might be expected for actors, her relationship with her boyfriend is the most convoluted of the bunch, involving secret relationships and what-not. This didn't exactly make her sympathetic, and to be entirely honest I'm not sure I can fault her boyfriend too much for doing what needed to be done to get ahead.

I feel ambivalent and frustrated about all of these characters, not because they're badly written but because they're all in such messy situations. It's hard to clearly identify any of them as being a bad person, even as nearly all of them have bad moments that left me wanting to slap them. As an autopsy of failed relationships, "Plus Nine Romance" will almost definitely hit a sore spot with you if you've had one. But hopefully, as you wince at the comparison, you can at least try to figure out how to do better in the future.