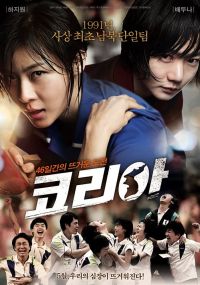 Have no doubt about it that Moon Hyeon-seong's "As One" is a feel-good romp around a political pigsty that will have you cheering, crying, cringing and counting the minutes until it's all over. The film is set around the 1991 Chiba International Table Tennis Championships, where the Koreas entered as a unified team to take on their dominant Chinese competitors. Politically and ideologically strung, to be sure, but the competitive nature of the story itself called for a clear antagonist, and unlike other cross-border films in the past, here that opposition is given a real presence in the form of the Chinese.

The film starts out its argument in the form of the expect text informing you that the follow cinematic feature was inspire by real-world events. Creative-nonfiction should always best served up honest as well as self-reflexive I suppose. In "As One" there is an unavoidable sense of nationalism that comes through, perhaps a little too thick for my liking, but it's when that political ideological gets directed at the Chinese team that things get a little messy.

As the opening text tells you, the film is based/inspired from real events and individuals. Problematic then I find the portrayal of the Chinese as sinister, arrogant, and cold-hearted bullies that blantaly cheat their way to success and glory. You may think I'm exaggerated there but the film makes not attempt to shed any favourable light on Team Korea's external threat. Even the Chinese commentator's are obnoxious and snobbish, but to be fair though so are the Korean commentators.

It was of course the director's intention to emphasis the inter-Korean conflict and have the Chinese as the perhaps more subsidiary threat. But do find Moon Hyeon-seong's choices in the film particularly interesting in terms of what he was willing to sacrifice for gaining the political high-ground found in "As One". A unified Korea as the expense of a Chinese scapegoat?

Team Korea has to content with a wide and troubling range of inter-team conflict as they preserver and fight their way to the final. They earn their way by resolving difficult barriers and forgetting which side of the 38th parallel they all come from. It's a hard journey, filled with personal pains and seemingly insurmountable personal and political mountains to overcome. Fitting then is the motif in the film of conquering "The Great Wall of China".

Some of the interactions between Team China and Team Korea were very simple, child-like even, and were absent of any narrative substance and fell flat. The film relies heavily on the conventions of 'under-dog' sports story, making the journey to victory a relatively dull and cliched affair. That is not to say the film won't move you, for if all this ideological heavy-handedness and the crutch of generic expectations are channel into to anything, it's the emotive factor of the film. You don't want the Chinese to succeed, we want to see Team Korea rise and overcome there personal and political histories, we want them to win! That's the allure of persuasive propaganda such as this, it is seductively emotive and quite convincing, and that's the problem.

"As One" almost had me. The actors, when not sprayed down to look sweaty by a clumsy intern, were relatable and carried a number of surprisingly delicate pieces of dialogue quite well. The actual table-tennis matches were well-captured, although the crowds and press in the stadium could have been sharpened up as background extras sometimes looked lost, consistently young, and unconvincing. I would have preferred less montages and flashy editing, but I am willing to surrender on that front given the overall feel and tone of the film. Still "As One" doesn't disappointed in terms of its entertainment value, but I generally like my films to be both entertaining and void of bombastic political posturing.