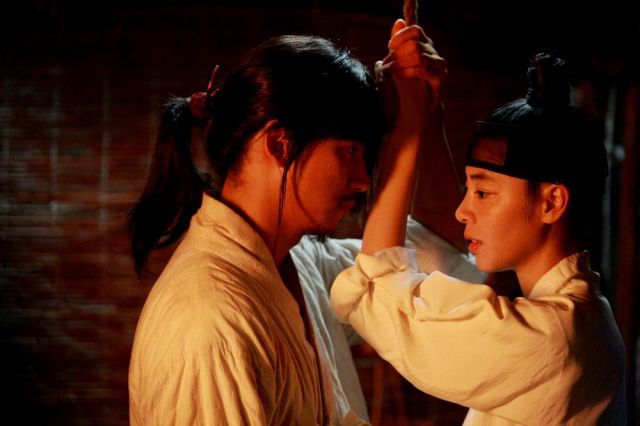 Yun-bok (played by Kim Gyu-ri) is a talented young painter in the Joseon era. Unfortunately, she is also a woman. The first plan Yun-bok's family comes up with is to just have her brother take credit for the art. That doesn't go well. So it's with a sense of resignation that we see Yun-bok going about her career, studying under master painter Hong-do (played by Kim Young-ho), and falling in love with Kang-moo (played by Kim Nam-gil), knowing that inevitably, Yun-bok's ambitions are doomed.

Surprisingly this doesn't actually have all that much to do with Yun-bok being a woman- at least not directly. Yun-bok's interests when it comes to artwork are skewed compared to those of the royal court, which of course commissions basically all art in this time period. Where art standards of the time prioritizes purity, morality, and natural beauty, Yun-bok becomes increasingly intrigued by common daily life, with all its lewdness.

While technically being a story of sexual awakening, in practice "Portrait of a Beauty" has a surprisingly disaffected tone. Yun-bok obsessively documents casual moments through art because she's fascinated by sincere emotion, especially happiness. Consider Yun-bok's background in this regard. Yun-bok's entire life is a lie. She doesn't actually belong at the royal court as an artist. While this does not bother Yun-bok that much personally, this outsider vantage point does give her a markedly different perspective from other artists who see everything through formal ethics.

There's a great scene, for example, where Hong-do argues that Yun-bok's work is satire rather than pornography. We can see Hong-do's logic, but we also plainly see that Yun-bok's inspiration comes from whatever random people watching she's recently done. Yun-bok's brilliance comes from how she interprets everything in its own context. Yun-bok never thinks about how people will actually react to her work, because as Yun-bok sees it, she's just an intermediary. The subjects create the real art, and she just immortalizes their reality.

This narrative direction also does a lot to enoble Kang-moo. Strictly speaking Kang-moo is just your typical sneaky rogue. But since Kang-moo does not know that Yun-bok is a woman, his boyish adventures with her have a lot more to do with class than gender. Kang-moo too, in his own way, is an artist. He knows where life is, and shows Yun-bok how to find it herself. Yun-bok's own sexual desire for Kang-moo springs out from this idea naturally. Love comes to be something that Yun-bok seeks out because she wants it- because what meaning is there in a successful career without true happiness?

"Portrait of a Beauty" is directed by Jeon Yoon-soo and features Kim Gyu-ri, Kim Young-ho, Kim Nam-gil and Choo Ja-hyun.

"[HanCinema's Film Review] "Portrait of a Beauty""
by HanCinema is licensed under a Creative Commons Attribution-Share Alike 3.0 Unported License.