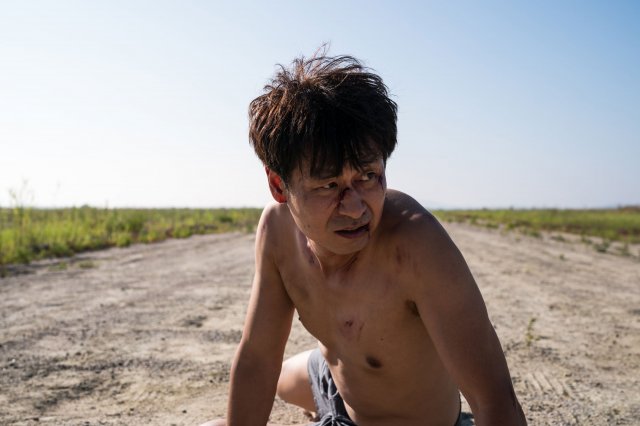 Tae-wook (played by Park Hyuk-kwon) is an underemployed pastor. He lives with his wife, Jeong-in (played by Ryu Hyun-kyung), his Young-ae (played by Nam Gi-ae), and their two young daughters. Following the revelation of a medical emergency, what follows is a fairly standard religious allegory. Tae-wook, the literal praying man of the movie's Korean title, must struggle with fidelity to his faith in the face of a tangible crisis which may be solvable through illicitly earned cash.

What grounds "Pray" morally is that the movie is not particularly heavy-handed with its Christian metaphors. Indeed, writer/director Kang Dong-hun manages a nearly agnostic depiction of faith in crisis by making its characters rationalize their questionable decisions while still feeling repulsed by their own actions. For much of the movie, Tae-wook and Jeong-in don't even communicate with each other.

This works, symbolically, as means of separating them from God's grace. In the purely Christian conception, after all, that's entirely what marriage is. The sacrament is a holy partnership demanding that you always hold your partner to a higher stander, and make them do better. That Tae-wook and Jeong-in don't confide their various schemes to each other signifies that they know what they're doing is wrong. Nevertheless, they lack better options.

But of surprisingly disproportionate importance is how Young-ae forms the spiritual center of the film. On paper, she's just a means by which the plot is moved forward. Yet we see from her interactions with son-in-law and daughter that Young-ae is much more than that to them. The soju-sipping granny doesn't look like a fountain of spiritual enlightenment, yet she is surprisingly at terms with her own mortality. Despite almost certainly having had a hard life, Young-ae has accepted the love of family as being her only truly prescient and everlasting joy.

The simple finality of Young-ae's comforting words go a long way to explaining why Tae-wook and Jeong-in flirt with the idea of criminality. Young-ae really is that important to them. What both have lost sight of is why. Their time on Earth is precious, and all too limited. Only by accepting those limits can Young-ae transcend mortality. Young-ae loves her family, and that's enough for her. Whether they return that love is on their souls, not their material circumstances.

The metaphor proves a beautiful one, particularly when accentuated by the stark realism exhibited by both the leads and the director when it comes to depicting frankly absurd and melodramatic situations. To Tae-wook and Jeong-in, a cruel joke is being played on them, and they must summon all their willpower to maintain their dignity in the face of such misfortunes. When God does grant them miracles, it's not in the way they expect. And indeed, I didn't see those instances as obvious miracles until quite some time after I finished "Pray" running over the events of the film in my way. Despite its simplicity, "Pray" tends to linger on in memory. God works in mysterious ways indeed.