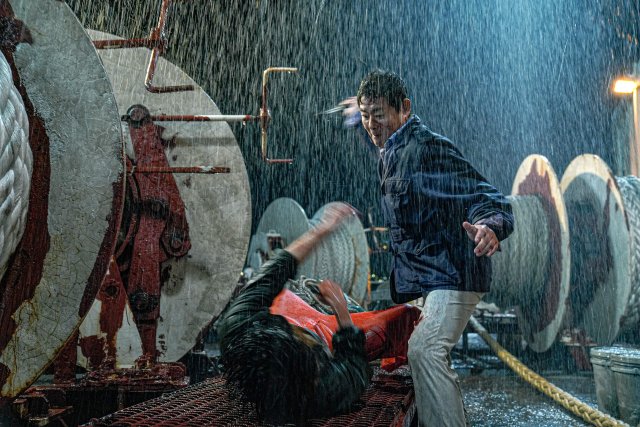 It seems that the success gorefest of the Taiwanese "The Sadness" sent ripples all through the Asian movie industry, with Korea soon producing an "answer" through "Project Wolf Hunting", a film that is as brutal as it is absurd.

A number of Korean criminals are arrested in the Philippines and are extradited to their home country. During their transport, however, a victim carries out a bombing attack killing a number of police officers and civilians, along with himself. The authorities then decide to transport the prisoners through a cargo ship, with Korean veteran detectives accompanying them for the three days "trip". Although supposedly classified, the plan is soon revealed to the press, which eventually emerges as part of the plan of the villains to escape, something that actually happens quite soon after the boat gets to the open sea. Soon, a bloodbath ensues against the policemen and the employees of the ship as a number of the inmates are true sociopaths, and Jong-doo, a man covered in tattoos, probably the worst among them. However, it is eventually revealed that the blood thirsty murderers roaming the corridors of the ship are not the worst threat, as another creature is being hidden in its cargo, and a number of secret agendas are unfolding all at once.

Kim Hong-seon directs and pens a story that appears intricate due to the twists, but is essentially as simple as it can get. Policemen brutalize criminals, criminals brutalize policemen and everyone in their path even worse, until an even more sinister predator appears, brutalizing everyone in his path. And that is it, more or less, following the pattern of the appearance of more and more powerful entities as the story progresses.

Despite its simplicity and nonsensicality, however, "Project Wolf Hunting" is pure entertainment, particularly for 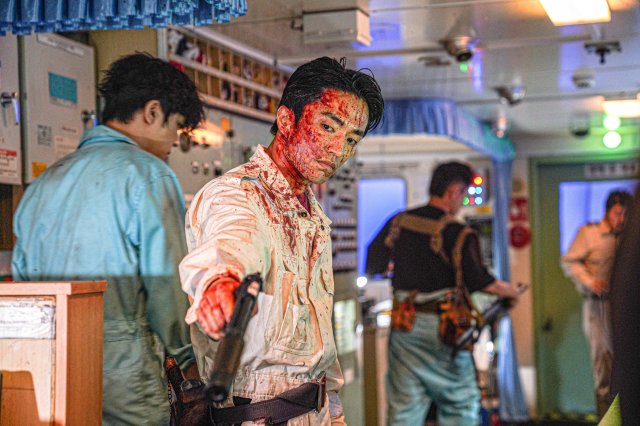 people who like their action bloody and non-stop. To achieve this, Kim has included a number of characters who seem to be intensely sadists, a trait that is not just restricted to the criminals actually, even if Jong-doo steals the show, at least in the beginning. As such, the way both sides kill, maim, and even chew on each other is a true wonder to watch, while the superhero/supervillain, predator/zombie aspects that eventually creep their way into the story add even more fun, in the same comic-like grotesqueness.

And I say comic-like, because the amount of blood spilled here borders on the ridiculous after a point, in an element that adds even more to the fun the movie offers. At the same time, the narrow corridors of the ship make the setting even more claustrophobic, adding to the atmosphere of terror that permeates the narrative. In that fashion, Yoon Joo-hwan's cinematography emerges as one of the best traits here, particularly in the way it captures the setting and frames the action, which, in combination with the impressive editing by Sin Min-kyeong and Lee Ga-ram and the excellent job in the visual and sound effects, results in a true audiovisual extravaganza. Lastly, the action choreography is truly top notch, with the use of guns and knives being equally exquisite, both inside and outside of the ship. 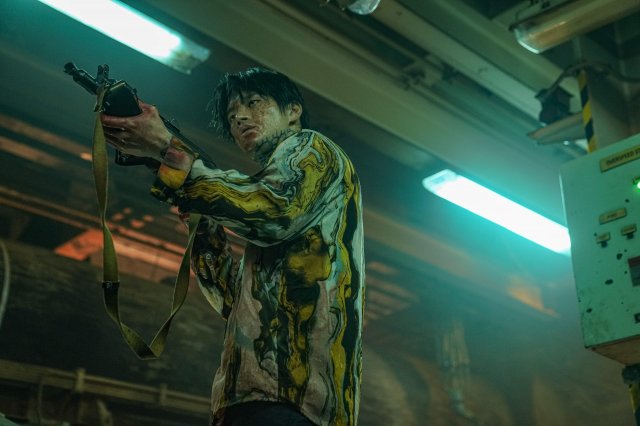 The acting is on a definite second place, but Seo In-guk as Jong-doo, Jang Dong-yoon as the mysterious Do-il, and Choi Gwi-hwa in the role of the monster definitely steal the show, although not exactly with their acting.

Not much more to say, if you like your action bloody, nonsensical, and with very few punches pulled, look no further, "Project Wolf Hunting" is probably one of the best movies you will ever watch.