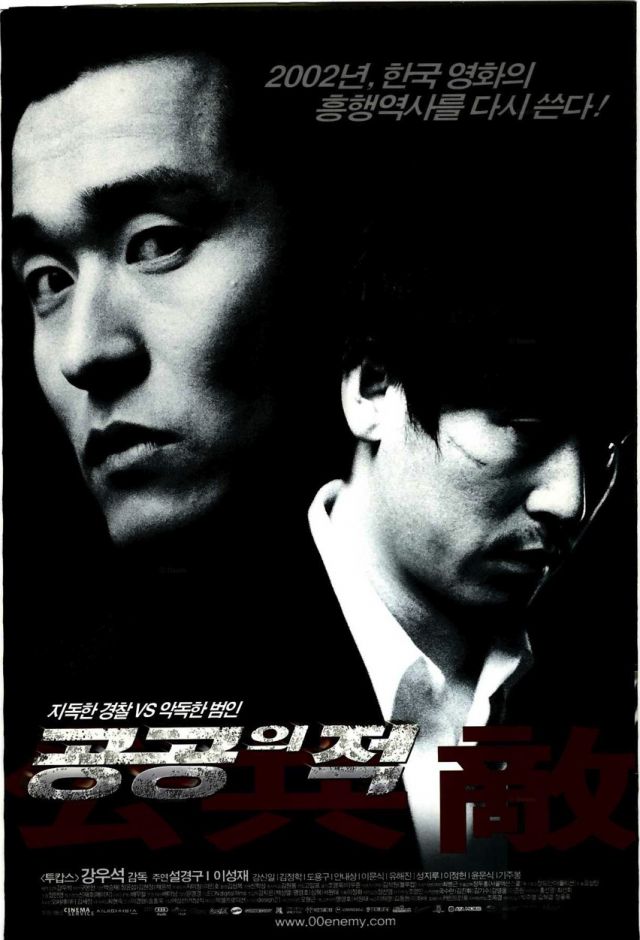 Cops and robbers are often defined in terms of absolute good and evil. Granted, there's such a thing as a bad cop or a good criminal- but the crimes themselves are a clearly set line. Bad cops only become truly bad when they break a law, and good criminals only become truly good when they stop breaking laws. Mind, only "important" laws count for these distinctions. Technicalities and noble law-breaking are perfectly fine.

What makes "Public Enemy" interesting is that this arbitrary distinction is just about completely ignored. Officer Kang, played expertly by Sol Kyung-gu, seems to be a good cop who's brutal because the criminals are so awful, but it quickly becomes clear that he's just a sadistic jerk who bullies people because he can, and aims it at criminals largely because they're the ones most likely to provoke him.

His cohorts in the police department aren't much better. It quickly becomes clear that corruption and bribery is rampant- and that no one, not even the superiors, really cares all that much. Officer Kang is in trouble with his boss, not because of the way he abuses suspects, but because even though he bullies gangsters all the time he rarely makes any arrests. It's the line of good and bad taken to an absurd extreme- it's obvious to anyone that Officer Kang is a terrible cop, but no one in the movie has any sensible reason for believing this.

Even though Officer Kang is a rather unsavory character, he's also a very funny one. "Public Enemy" is filled with great fight scenes, and humor is injected into the action by having Officer Kang threaten and then humiliate criminals by reacting to their predictable bluster with disdainful annoyance. It's a great exploration of the environment- criminals receive their comeuppance, not really for being evil so much as for being jerks. Everyone in this movie is basically human- and our expectations of the action is such that we can empathize with everyone while still understanding they should probably be in jail.

There is one exception. Kyu-Hwan, played by Lee Sung-jae is a genuinely vicious sociopath. Kyu-Hwan isn't a particularly clever or inventive criminal, but he does have a lot of social capital. Consequently, Officer Kang's efforts to arrest him are thwarted at every turn. It's understandable why no one in the department believes Officer Kang, as even here Kang is motivated principally by spite. Still, the sudden realization that no one cares about an actual malicious criminal starts to drive Officer Kang crazy- leading to a most satisfying character arc.

"Public Enemy" belongs to the genre of "basically crazy cop beats up everybody" action movies. It rises above the norm of this drama by having such a blatantly cynical view of the way this plot attempts to neatly divide cops and criminals into good guys and bad guys. It has all the laughs and actions that could be reasonably expected- but be warned. This is an extremely violent movie, and while the nuance is interesting, it's not enough to make an appeal to anyone who's not a fan of the genre. For those who are, "Public Enemy" is a must-see.