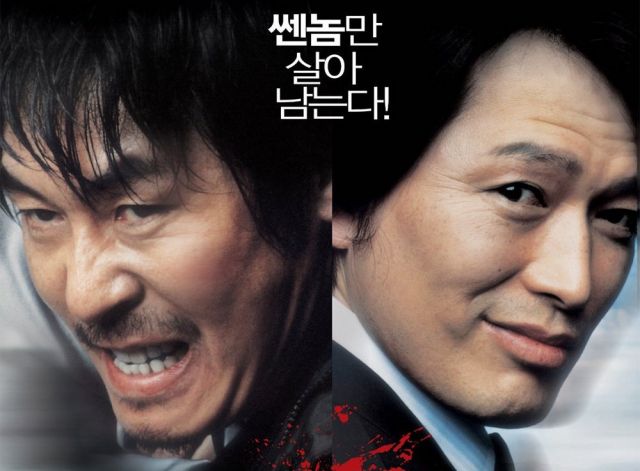 It's oddly appropriate that right away in "Public Enemy Returns" we see big screen South Korean cop icon Cheol-joong face off against a bunch of elementary school students. They no longer respect law enforcement because of what they see in the movies, and Cheol-joong himself is a prime example of how police in South Korean film at the time were depicted as petty corrupt buffoons. Gangsters, meanwhile, were seen as cool, which is how teenage knuckleheads Ha-yeon (played by Lee Min-ho), Hee-chan (played by Lee Jae-won-I), and Seong-jin (played by Koo Seong-hwan) get wrapped up in the criminal underworld.

This framing device sets "Public Enemy Returns" up as a sort of apology for films acting as defacto education for how real world cops and robbers operate. This is amusingly ironic in and of itself, though, since the "Public Enemy" franchise has always drawn most of its comedy from how blatantly unromantic its characters are. Cheol-joong is constantly grumbling about how he doesn't make enough money. Other characters, even Cheol-joong's own daughter, consistently demonstrate trained patience in response to Cheol-joong's goofy dramatic gestures.

The villain this time around, Won-sool (played by Jung Jae-young) is also difficult to take seriously. But much like Cheol-joong, Won-sool is motivated by an obsessive desire to make people take him seriously. Neither man ever appreciates that the harder he tries to look cool, the less cool he actually is. There's a brilliant parallel with their cynical kids, who easily bond over the shared experience of having a father that can be easily provoked into a pointless public fistfight.

None of this is very fun in context of the actual plot, which involves the aforementioned three knuckleheads consistently making stupid decisions. I mean, I get the contrast that's being attempted. The knuckleheads all think that they're going to embark on a epic illicit career path. Won-sool, though, is only interested in the money, not the grand narrative. But the latter proves especially helpful at providing him with a steady supply of gullible fall guys.

That's a rather dark subtext to be putting into a film that is otherwise a fairly straightforward action comedy. Still, the point is well-taken. Movies are a stupid place to try and find important life lessons, and the people who try to live their lives according to such narratives (namely Cheol-joong and Won-sool) just get locked into a cycle of permanent dissatisfaction. For them every failure, however minor and insignificant, is proof that they are not the kings of the world, a position which they so obviously deserve.

It's a credit to director Kang Woo-seok that "Public Enemy Returns" never comes off as that preachy in context. The absurdity of any given banal situation is always so effectively hyped that the only particularly obvious observation that can be made any given minute is that Cheol-joong and/or Won-sool do not have broad skill sets at all. Cheol-joong is good at getting in people's faces, and Won-sool is good at staying out of them. This is the foundation of the movie's sense of humor, and plenty of strong gags are sprinkled throughout.