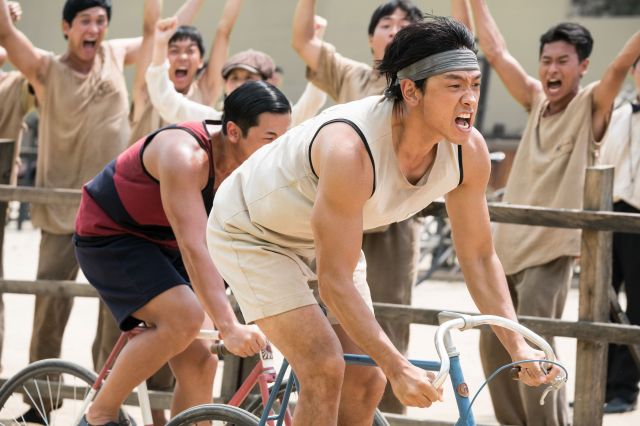 So apparently, back during the Japanese Occupation of Korea, bicycle racing was a pretty big event. Right away we see a huge Olympic-style Stadium where the greatest athletes of the day compete for glory on the track via these newfangled inventions called bicycles. Then we get to the post-race, where a dozen odd members of the Korean Resistance are discussing whether their goals are best achieved with terrorism or improving the quality of their bicycle athletes.

That's, uh, not an exaggeration. Huge stretches of "Race to Freedom: Um Bok Dong" really are about these members of the Korean Resistance coming up with assassination schemes and following through on them. This has absolutely nothing to do with the titular Um Bok Dong (played by Rain), except that one of the Korean Resistance members runs a bicycle training compound. Um Bok Dong does eventually manage to show up to one of these assassination events, although I'm still not sure what he was even doing there.

Logically "Race to Freedom: Um Bok Dong" would make a lot more sense as a biopic. And when Um Bok Dong is introduced, it seems like that's what we're going to get. I actually rather liked how Rain plays Um Bok Dong as a big dumb meathead who's just tired of carrying buckets of water everywhere, even if doing this has made him insanely strong. Um Bok Dong's childlike wonder at how bicycles make this process so much easier is hilarious, even if Rain is obviously way too old for the role.

Unfortunately moments of humor are few and far between, as writer/director Kim Yoo-seong is always on the lookout for the next setpiece wherein freedom fighters wage war against the Japanese. Sometimes these are bombastic and ridiculous, like the attempted bank robbery where an anachronistic tommy gun makes an appearance. Usually, though, the tone is just grotesque and morose. Like the prison scenes featuring nude torture, or a particularly bizarre sequence where a sniper takes aim at stragglers in an informal bicycle race.

The Japanese characters, too, are an unfortunate mix of cartoonish absurdity and monstrous evil. They're just about impossible to take seriously. Look at the scene where they're literally moving around giant novelty size chess pieces. Observe the ridiculous accents. One of the conspirators is a sinister Japanese woman who wears a kimono with heavy makeup. Who this person is, and why she's always hanging out with these other government leaders, is never explained even though her strange character design makes her the most distinctive of the lot.

The story's inherently ridiculous conceit of using bicycle races to win freedom against Japanese oppression doesn't do the movie any favors either. It's a shame, really. Um Bok Dong was a real person, as the historical photos in the credits show, and I bet he did indeed have a very interesting life story. So why did writer/director Kim Yoo-seong feel the need to tack on this obviously made up and completely irrelevant freedom fighter subplot? Misplaced patriotism is my best guess.