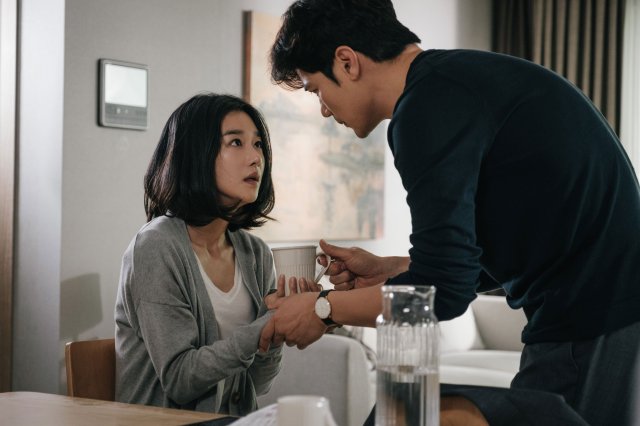 The marketing for "Recalled" has greatly played up a seemingly important part of the premise, that leading lady Soo-jin (played by Seo Ye-ji) is apparently having visions of the future following an accident that rendered her an amnesiac. The Korean title even goes so far as to render this literally by going by the moniker tomorrow's memories. Well, I don't think it's much of a spoiler to say that's not what's actually happening. As bad as I am about plot twists the first one seemed pretty obvious.

From that point going forward "Recalled" enjoys a glow of lowered expectations. Once the movie finally spells out that suspicious happenings are indeed afoot, subsequent plot twists get a lot more interesting, and work in sum to spell out a tragic story of love and loss. "Recalled" bears a fairly strong similarity to "Forgotten" tonewise in that while the explanations behind the weird stuff are the obvious hooks, it's the emotional punch after those hooks are explained that really end up resonating.

Take the tortured interactions between Soo-jin and her leading man. They are simultaneously familiar with one another, but not exactly trusting. What little we can't deduce on our own is explicitly called out by detective Ki-sang (played by Park Sang-wook). Among other observations, Ki-sang notes that in their wedding photo, Soo-jin is on the wrong side of her husband. This minor detail, explained in the very last scene, is packed with subtext about the true nature of their relationship.

Ki-sang is an interesting character because in a proper mystery thriller he would have a more prominent role. Soo-jin, on her own, is largely incapable of explaining her own mental state. It's Ki-sang that's piecing the actual situation together in the background. What Soo-jin is left wondering is, should she trust this man who claims to be her husband? Is he really such a consummate liar he could fake those grief-stricken tears from the opening scene? And if so, why?

The emotional arc works both ways too. Just as Seo Ye-ji emotes in helpless panic over whether she can really find serious holes in her partner's love story, once we finally find out what's motivating her husband, his actions take on a very different context. He's a pathetic figure drawn into terrible circumstance by love. But in a twisted way, this was a fate he deliberately chose. And in the end, no man or woman can really know how much someone really loves them unless they're drawn into a life-or-death situation.

This dark subtext carries through straight to the end of the movie, as we get into what feels like an effective postscript of the Orpheus myth. Our leads are willing to go to hell and back for the sake of love. The trouble is, getting to hell is the easy part. It's the getting back that proves a real crisis of faith. In the end, both leads just find themselves wishing they could have done better, could have been better. These are regrets we can only hope to avoid.