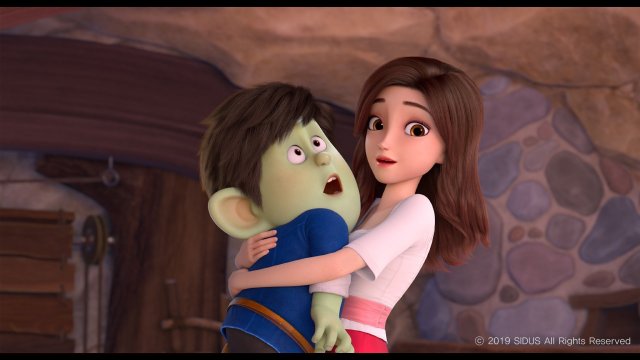 For all its fairytale pastiche setting, "Red Shoes and the Seven Dwarfs" is a surprisingly earnest animated movie. There's no ironic commentary about fairy tale tropes or obnoxious pop culture references. The first twist is surprisingly straightforward. Our noble heroes follow up something heroic with something stupid, because they're idiots who put too much stock in appearance. The second twist barely even qualifies as a twist at all. What if Snow White was fat?

There's actually no reason why Snow White can't be fat, since it's not relevant to the original story. Or this version either. Well, sort of. Snow White's stocky appearance is important because she's stronger than the average woman. But for the most part it only really matters to the extent that the dwarves (the heroes I mentioned before) treat the conventionally pretty Red Shoes with obnoxious adoration. Being heroes, of course, they would have helped the homely Snow White too.

Character exposition, mainly through jokes, is more central than plot here. Through the dwarfs' constant discussion of Red Shoes we get an excellent understanding of who the dwarfs are. They have distinct personalities that are widely at odds with each other...yet they remain friends throughout everything. Because even if they are cursed, they get that their personality is of greater importance than their physical appearance- inconvenient though that appearance may be.

The visual gags here are brilliant in their simplicity as writer/director Hong Sung-ho gets a lot of mileage out of physical contrasts. The short little dwarfs just look and feel so awkward and weird. Red Shoes isn't much better, because she isn't used to people seeing her as pretty. A brief moment in town that gives us a glimpse into what the life of Snow White is normally like is simultaneously petty, tells us a lot about the characters, the setting, and even about our own world's superficial beauty standards.

But for all these strengths in terms of sheer polish nothing can top the manic action sequences which are lovingly beautifully structured around the strength of each individual dwarf. The battles constantly heave back and forth between sides as a gimmick is used, and then defeated, until final every single possibility has been exhausted. The fight against the magic mirror, in addition to being gorgeous, has a beautifully telegraphed ending around the one detail that we were, of course, not supposed to be looking at.

With every frame I could feel the sheer effort the all-Korean production team put into "Red Shoes and the Seven Dwarfs". Every scene is critical with not a single wasted moment. Even the credits sequence is given definite deliberate thought to be an epilogue that matches up with the movie's themes. This, after a final anticlimactic line that's a legitimately great joke that doesn't take away from the generally epic sequence that led up to it. I don't like calling movies perfect in general, but I really am that hard-pressed to come up with a single flaw here. "Red Shoes and the Seven Dwarfs" is that good.