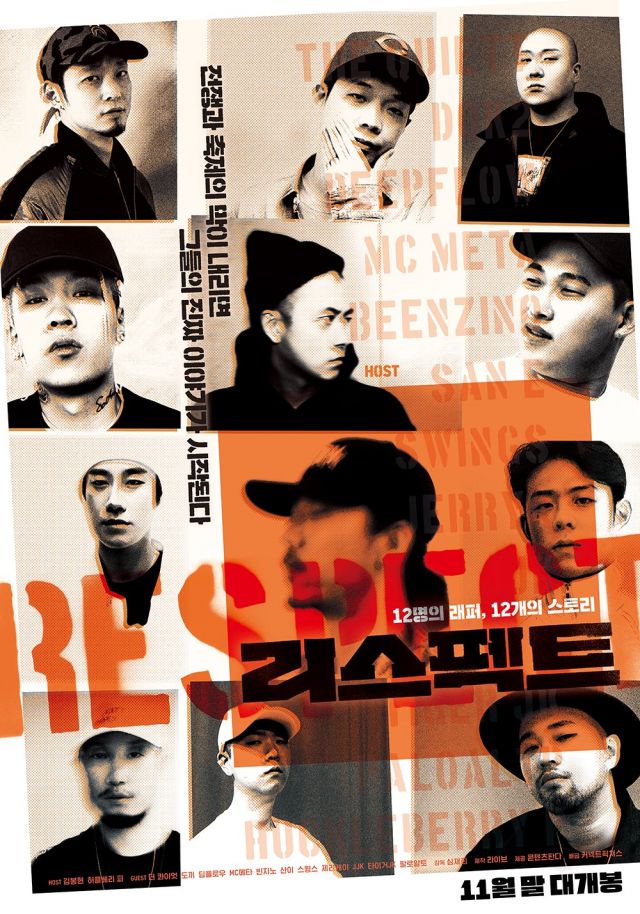 In a move that is awfully bold given the documentary's inherently esoteric subject matter, director Shin Jae-hee takes his twelve interviews with South Korea's most well-known rappers and has them talk about something a lot more abstract. Namely, what "Respect" means in the context of South Korea's rapping community. Now, when I call "Respect" esoteric, I don't just mean to foreigners. South Koreans in general also don't know that much about what the country's rapping subculture is like.

By far the most prominent mainstream exposition the music genre gets is through the competition program Show Me The Money. Which is mentioned here, hilariously enough, in fairly derogatory terms. Why? Because that variety show makes it seem like rap is all about competitive idol style performances, when there are actually many different ways to earn "Respect" in the culture.

Because as it turns out, rap is not always about cinematic style rhyming battles where the performers are always coming up with increasingly brutal put-downs. In this day and age there are many different kind of rappers. Some function best when making rips in the studio. Others are street performers. Still others produce videos on YouTube. Others function mainly as lyricists or poets. The point is, no two rappers are the same- and "Respect" is all about recognizing how fellow performers have different strengths and weaknesses and can't be easily compared.

The nuances of this may be difficult to grasp if you don't have much familarity with South Korean rap culture, as "Respect" makes no effort to contextualize any of this. While I get that my description of the documentary sounds fairly straightforward, I honestly couldn't really follow what most of the interviews were even about while I was actually watching it. Small conversations about a single song or performance only really coalesced once I started trying to tie the anecdotes together into a big picture.

Until that point, the main parts of "Respect" that really stand out are the performance pieces- which are all too brief, but benefit a lot from contextualization. As an English speaker, you may note that the English language bits in these songs are often entirely nonsensical. Actually, as explained by the rappers, the Engish and even the Korean in these songs is garbled because the entire idea is to build as raw a piece of expression as possible. It's all about what you feel- and sometimes, the thoughts swirling in your head don't make sense even to you.

Well there's that and also what goes into the rhythm. Honestly I'm not an expert and I fully expect I was interpreting some of the interviews incorrectly. But then that's what gets you "Respect" is just putting yourself and your ideas out there and not being afraid of what other people will say about them. In that light I have to give director Shim Jae-hee that much credit. Sure, the documentary is technically unremarkable but he had a strong idea of what to do and by golly, he saw that idea through to the end.

"Respect" is directed by Shim Jae-hee.