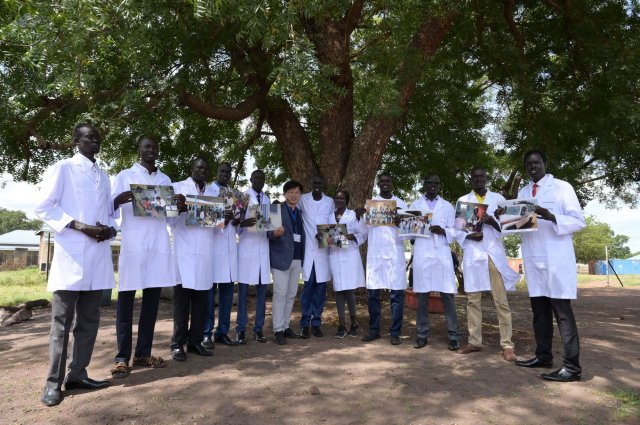 In 2010 director Goo Soo-hwan made "Don't Cry for Me Sudan" detailing the charity work of Catholic priest Lee Tae-seok in wartorn Sudan. The cultural impact of the documentary, while big in Catholic missionary culture, isn't that well-known elsewhere. Opening scenes detailing "Don't Cry for Me Sudan" being shown at the Vatican sells just how influential the movie was. And so "Resurrection" works as a retrospective, asking what happened to all those marching band kids ten years later.

They decided to follow in Lee Tae-seok's footsteps and do good work for their community. Africa in general, and I'm sure South Sudan in particular, suffers from a brain drain problem. Many people with the educational background necessary to improve their home country just decide to leave instead. You can't really hate a person for doing that. After all, what do they owe their own lousy home country that never gave them anything?

Lee Tae-seok didn't think like that. And everyone could tell as much just from his physical appearance. Lee Tae-seok was a Korean man who didn't owe the people of Sudan anything. So why did we dedicate his life to them? Well, because it was the right thing to do. They had nothing, and Lee Tae-seok helped them reach their true potential. Lee Tae-seok was a major formative figure to these children. So they decided to do likewise, and become doctors.

Not all of them of course, and it actually takes quite awhile for us to get to the doctors locally running free medical clinics and showing compassion just as Lee Tae-seok did. Up until that point, director Goo Soo-hwan impresses us with a wider spectrum of offbeat persons all inspired by Lee Tae-seok in their own eclectic ways. We even see a Korean man who was inspired to fund an internationally competitive youth soccer team because "Don't Cry for Me Sudan" made him want to make a difference to these kids too.

While barely discussing Lee Tae-seok directly, "Resurrection" show us just how important this man was by taking a long-term perspective. For most of the documentary Goo Soo-hwan isn't even asking his various interviewees about Lee Tae-seok, but rather about their own lives, their own motivations. When the interviewees speak, just brightening up with optimism and hope about the better world they're confident can be theirs, if only they hold compassion close in their hearts like Lee Tae-seok did.

It makes me feel ashamed for taking such a cynical view of "Don't Cry for Me Sudan: Shukran Baba" earlier this year, despite the similar subject matter. I thought to myself that the documentary was trying too hard to boost Lee Tae-seok's reputation. Now I see that documentary in a different light. That movie shows the critical context, the subtle expressions of love that makes Lee Tae-seok's current legend possible. But is he really a legend? Because "Resurrection" makes the kids in his marching band look like the real heroes. As well as it should.