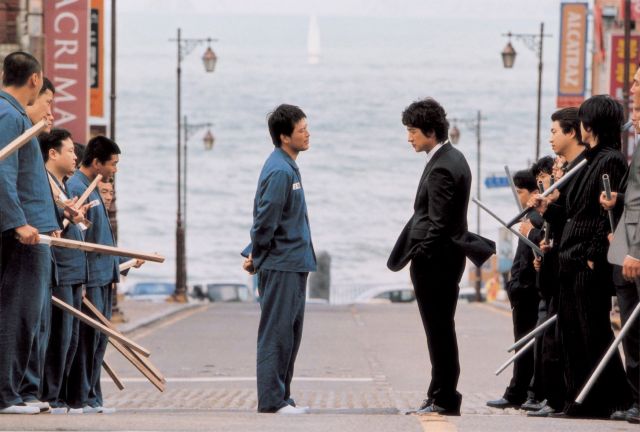 The perpetually frustrated mobster Chi-seong (played by Jung Jae-young) spends the first scene in "Righteous Ties" reluctantly having to take responsibility for a single violent criminal act in order to preserve the interests of his gang. From here the narrative gets kind of murky. Where we might expect a stoic appraisal of criminal honor or possibly a farcical comedy about wacky adventures in a prison, writer Jang Jin somehow manages to do both halfway.

The effect is odd, to say the least, and not particularly helped by how Chi-seong is constantly confused about which kind of movie he's supposed to be in. One minute the guy's dispensing justice to the codeless bullies who run amuck in the prison, and the next he's forming social groups of ragtag criminals who have committed wildly different crimes, yet are united by their sense of loneliness. "Righteous Ties" has to be the only prison movie I've ever seen that makes gay jokes without also making prison rape jokes. I guess that technically this counts as praise?

Everything about "Righteous Ties" moves along in the same vein. The movie's ideas are somewhat interesting and often peculiar, but they're constantly abandoned in the favor of even more weirdly vague ideas. As a result, a movie that starts off seeming very straightforward becomes increasingly surreal. Noisy military jets that initially seem like a metaphor for the inherently lonely and destructive nature of the prison end up having a payoff that renders this metaphor confusing, to say the least.

Matters are not helped by how much of the plot doesn't take place in the prison at all, but rather on the outside with Chil-sung's buddy Joo-joong (played by Jung Joon-ho), who is given the task of dealing with Chil-sung. Joo-joong takes these responsibilities lightly, to little consequence. I would describe his demeanor as being of a guy whose boss gives him an unpleasant job, so he just avoids putting that much effort into the task.

If I had to nail a specific tone to "Righteous Ties" it would be to imagine the tone and trappings of an office workplace comedy except tied to the tropes and setting of a gangster movie. It's hard to come up with any other way to describe the various attempted escape sequences, which always fail for technical reasons and poor planning. The prison guards, far from caring what inmates are planning, act more like disinterested human resources officers looking for excuses not to have to write a report.

With a setup like this it should be little surprise that the climax, which is set off by a gigantic explosion, ends up feeling like an anticlimax, The final confrontation between Chil-sung and Joo-joong is likewise an oddly deflated affair, where the fight feels oddly petty and pointless. "Righteous Ties" is an extremely strange movie- the kind that's more interesting to analyze structurally than it is to actually watch. Those of you who enjoy novelties will probably get a kick out of this one. Everyone else, not so much.