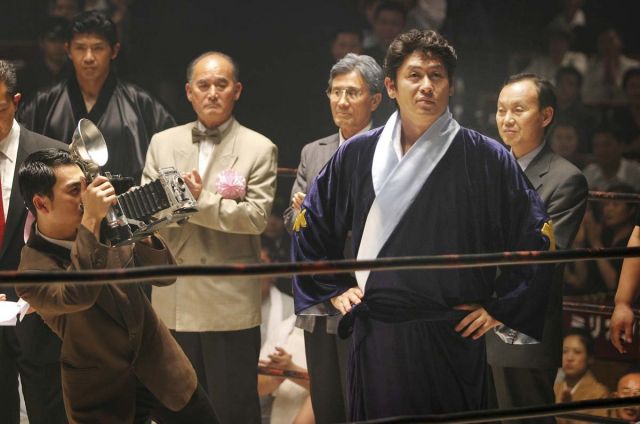 Sin-rak (played by Sol Kyung-gu) was just a kid on a farm in Korea during the thirties, until circumstances conspire to send him to Japan during the forties and begin a career as a sumo wrestler. While Sin-rak had an excellent physique and a fair amount of talent, ultimately, he lacked discipline. Well, as an ethnically Korean man living in Japan Sin-rak also had to contend with racism. But in the end Sin-rak's personality, an odd mix of quick temper coupled with excessive theatricality, proved a better fit for a far more eccentric sort of athletic career.

If you know who the titular "Rikidozan" is then this film is probably going to feel rather predictable. I, however, was entirely ignorant- which led to "Rikidozan" having a very surreal atmosphere. Korean production and lead actor notwithstanding the film is a doggedly dedicated colorful period piece about the forties and fifties in Japan. The loving attention to detail in the beautiful cinematography fees horribly out of place when across this backdrop we've got Sin-rak loudly bumbling and causing a mess in nearly every scene.

What makes Sin-rak even weirder as a character is that dangerous psycho persona notwithstanding, Sin-rak has a lot of fans and supporters. Sin-rak's constant aura of humiliated hyper-masculinity is an oddly effective metaphor for the Japanese nation state as a whole. Sin-rak, much like Japan, got too aggressive too fast. Yet in that furious drunken madness, even former enemies see extraordinary potential. Sin-rak fights for honor, after all.

The underlaid irony, of course, is that Sin-rak is fighting for Japan's honor when he is not actually Japanese. Well, that's A Matter of Interpretation really. Sin-rak clearly does not see himself as a Korean person, even if he rambles in his native language every so often in weaker moments. And after a certain point no one else sees Sin-rak as a Korean person either. Sin-rak has so perfectly assimilated into his identity as nationalist Japanese hero that even the outbreak of the Korean War doesn't register as important enough to warrant mentioning in the grand narrative of his life.

But what exactly was that grand narrative anyway? Well that's the great failure or accomplishment in "Rikidozan" depending on how you look at it. Sin-rak was just a petty thug who probably would have suffered from chronic violent mood swings whatever his fortunes and misfortunes were in life. Yet at the same time, it's genuinely impressive and even amazing that Sin-rak was able to constructively channel his inherently destructive energy as well as he did.

In Sin-rak's twisted reckoning, it's better to react with excessive and obviously contextually inappropriate emotion, than it is to let anybody down by acting like anything less than a larger than life legend. That kind of life philosophy does not lead to a life of restful mental happiness, but then "Rikidozan" is not a movie about the real life man. "Rikidozan" is an icon of an era who is remembered as existing on the threshold of reality and fantasy.