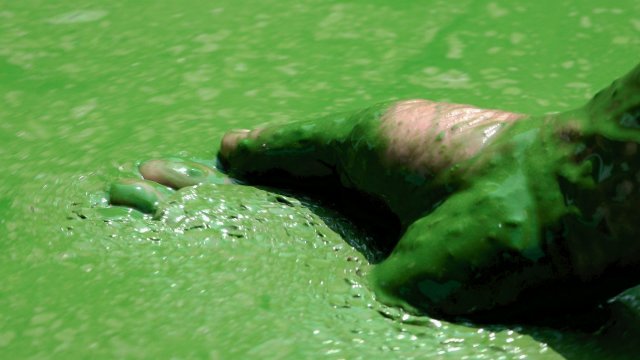 In 2018 former South Korean president Lee Myung-bak was convicted on charges of accepting bribes and embezzling. Though prosecutors proved beyond a reasonable doubt that Lee Myung-bak had received illicit money from corporations, what they did not prove was why. "Rivercide: The Secret Six" goes into what is probably the most plausible way Lee Myung-bak made himself valuable to his corporate benefactors- the Four Major Rivers Project, an unmitigated disaster that destroyed countless local ecosystems at massive taxpayer expense.

Director Kim Byeong-ki does not get into the story chronologically. Our starting point is actually the present day, as we are exposed to an ecological survey that shows one river has been turned into disturbingly sickly looking green slush, nicknamed green tea water for its constancy. But far from being edible, green tea water is a harbringer of death. We soon see chilling footage of giant fish populations and even earthworms smothered to death thanks to the pollution created by the Four Major Rivers Project.

It's only after this has been established that director Kim Byeong-ki takes us back into the origins of the project. The projected benefits for the project are largely skipped over as we are instead shown the various arguments environmental activists, local farmers, and scientists made ahead of time predicting the disastrous consequences that we have already seen come to pass. So then the question is naturally begged- why?

That's where "Rivercide: The Secret Six" gets into the titular secret six- various advisors to Lee Myung-bak on the project who claimed non-partisan affiliation to the administration and the project at large, but who are upon closer inspection shown to have long-standing undisclosed ties with all sorts of other financial beneficiaries to the project's approval. Their aguments for the merits of the project in retrospect are unconvincing even absent our hindsight. They're simply utterly dismissive of any kind of criticism whatsoever.

That attitude persists into the present day, where the secret six dodge director Kim Byeong-ki's various ambush interviews with surprising fear. It's not completely obvious when these scenes were filmed, but the disturbing expressions these men show at even being photographed by Kim Byeong-ki suggest they had good reason. The prevailing political mood from 2016 onwards greatly increased the prospects that these men cold face official prosecution on corruption charges for their unrepentant destruction of the South Korean environment.

Such prosecution has yet to occur. To the contrary, over the ending credits we see one member of the secret six addressing a far-right wing rally- curiously unconcerned about accidentally saying something incriminating so long as he is among friends rather than journalists. "Rivercide: The Secret Six" presents a convincing case that the Four Major Rivers Project was never about its hypothetical economic benefits. The project was always just a scam designed to fill the pockets of Lee Myung-bak and his cronies with needlessly destructive labor. This documentary is critical viewing for anyone with interest in South Korean politics, environmental politics, or just fraudulent public works projects in general.