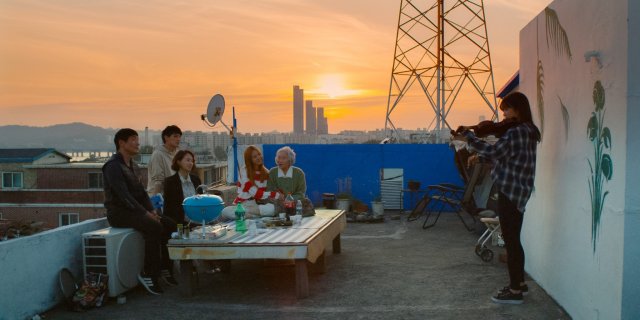 While obviously fairly cheaply produced "Road Family" demonstrates some surprisingly lofty ambitions in its worldbuilding. Yu-ri (played by Park Cho-rong) is a teenage violinist with no friends because her more well-to-do classmates at violin school clearly think she's beneath them. This is due, in part, to Yu-ri living with her blue collar dad Hyeon-doo (played by Park Won-sang) who has to work long hours to support his daughter as a delivery driver.

Most of the best elements in "Road Family" are the subtle ones which, as usual, are terribly difficult to translate. One running gag demonstrates how Hyeon-doo, as the designated local delivery driver for his company, has his face plastered nearly everywhere so that people can see that the scary, angry looking man is doing his job and is not a criminal. In spite of this, no one appears to recognize Hyeon-doo, let alone trust him, leading to his work being stymied by tragicomic delays.

Another such aspect is when Dae-gook (played by Do Ji-han) is introduced as the daddy of various misfit teenage girls. This isn't as sinister as it sounds. In fact the strange form of address is intended to have the opposite effect. As daddy, Dae-gook takes care of his girls. If they were to call him their older brother, that would have a sexually charged interpretation in Korean that would rather go against Dae-gook's character and render the cutesy low budget sound effects quite inappropriate.

Which brings me to the movie's main weakness. For all "Road Family" gets into serious issues like bullying, runaways, and even suicide, writer/director Jang Jae-il stubbornly insists on trying to maintain a situation comedy styled tone that at times sends some rather mixed messages. A scheme on Dae-gook's part to avenge Yu-ri's humiliation, for example, comes as rather more vicious than I suspect was intended.

Consequently I was disappointed that the characters didn't have quite as much depth as they initially seem to, with contrived plot points taking precedence over characterization. When I saw an old granny character at Dae-gook's home, for example, I immediately wondered what her deal was. But it's never explained who that woman is, her presence apparently being for the sole purpose of making Dae-gook seem harmless even as he engages in explicit illegal activity.

Speaking of which, "Road Family" has villains in the form of gangsters, who really don't add anything to the story mainly because their own involvement in the plot just isn't that interesting. The real hook of "Road Family" is the chemistry between Yu-ri and Da-hye (played by Kim Da-ye) who are both social outcasts for completely different reasons. Their awkward budding friendship is compelling.

This culminates in a weird road trip that accomplishes and establishes nothing save for terrifying their father figures. While the men had been good in their supporting roles up until that point, their transition to actual main characters leaves much to be desired. Questionable creative decisions like this don't ruin "Road Family", they just stifle its potential rendering the final film OK at best.