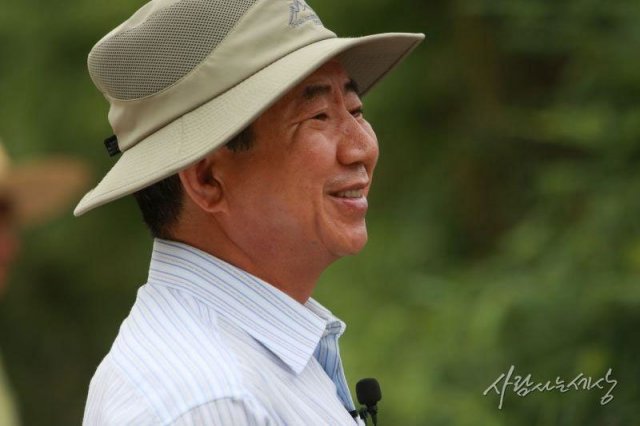 Supporters of the late South Korean President Roh Moo-hyun are under no illusions that he was a particularly smart man, nor that they were particularly wise to follow him. "Roh Moo-hyun and the Fools" traces how this was his main appeal. In a South Korean political system that had since time immemorial championed realpolitik over basic human empathy and decency, Roh Moo-hyun was a nutcase who refused to sneer at those who were different than him.

"Roh Moo-hyun and the Fools" is less about Roh Moo-hyun himself as it is about his star-eyed supporters who bonded with him via an Internet fan club. There's a nostalgic air to extended sequences where director Kim Jae-hee interviews members of this club and among other things goes into the logic by which they chose usernames. I liked the woman who named herself after her second child not because she wanted to, but because her husband had already named himself after their first child.

They describe a golden age where Roh Moo-hyun would run around making populist speeches pleading for unityin South Korean culture. In a modern context these critiques may sound nonsensical, but only because the culture Roh Moo-hyun was attacking has mostly disappeared since then. Nobody implies that being from the Jeolla province makes someone a weak-willed fifth columnist in part because Roh Moo-hyun was so relentless in calling this rhetoric out.

Unfortunately Roh Moo-hyeon's inspirational talents were of limited utility in politics. "Roh Moo-hyun and the Fools" documents how the political opposition made a point of demanding Roh Moo-hyun's immediate impeachment from the moment he took office, for extremely vague and petty reasons. A property tax that only affected wealthy landlords is one particularly galling example.

Another extended attack over a satirical play shows that while the opposition could dish out malevolence they couldn't take it back in turn. All of this is effective foreshadowing for Roh Moo-hyun's successor Lee Myung-bak, who responded to criticism of his policies far more viciously and monstrously than Roh Moo-hyun's would have ever considered good and decent. Not that there's any discussion of him in the documentary.

That's the main weakness of "Roh Moo-hyun and the Fools" actually. For a documentary there's surprisingly little context of the world Roh Moo-hyun came into and the one he left. Director Kim Jae-hee is clearly assuming you already know a lot of the story. Although even taking that into account there's surprisingly little discussion of actual policy here. To a properly cynical viewer Roh Moo-hyun may come off as vapid and useless a politician as his opponents, he was just a lot nicer about it.

Strangely enough I'm not sure the target audience for "Roh Moo-hyun and the Fools" would even dispute this charge. Part of the reason why it's so easy to be fond of Roh Moo-hyun ten years after his death is because of the cultural change he inspired. That the South Korean people had to suffer through two miserable petty and vindictive conservative governments to get there just make the nostalgia shine that much brighter.

"Roh Moo-hyun and the Fools" is directed by Kim Jae-hee.

"[HanCinema's Film Review] "Roh Moo-hyun and the Fools""
by HanCinema is licensed under a Creative Commons Attribution-Share Alike 3.0 Unported License.