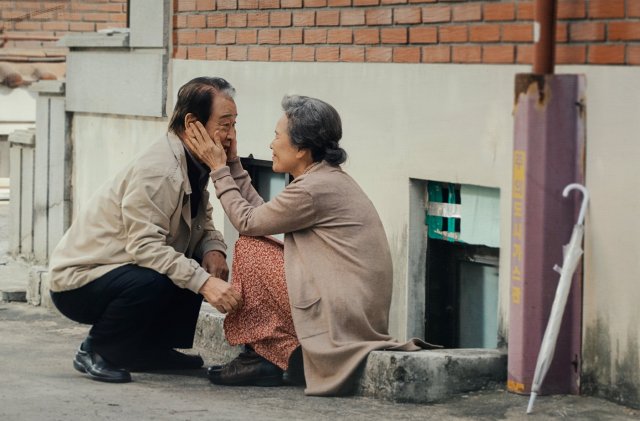 At first glance "Romang" is just a look at the modern day lives of old people in South Korea. Nam-bong (played by Lee Soon-jae) is a gruff, grumpy old taxi driver. Mae-ja (played by Jung Young-sook) is his long-suffering wife. Their son Jin-soo (played by Jo Han-chul), his wife Jeong-hee (played by Bae Hae-sun) and their adorable daughter Eun-ji (played by Lee Ye-won-I) are a presence, but they have their own lives. Besides that, Nam-bong and Mae-ja soon discover they have problems which the younger generation can't solve.

You know how marriage vows always go, in sickness and in health? Well, "Romang" is an exploration of what happens in the first case scenario. The family that normally gets along well enough struggles with how to respond to Mae-ja's increasingly erratic behavior. Mae-ja herself alternates disconcertingly between childlike helplessness and aggressive psychosis, depending on which form of herself has bubbled to the surface in her dementia-addled haze.

But don't think of Mae-ja as being a helpless victim. One of the more disturbing elements of "Romang" is how we can see Mae-ja gaining some faint self-awareness of how she has become impossible to live with. Nam-bong too, shows clear moments of rage about her declining mental state, yet eventually this gives way to resignation. After some difficult sacrifices, the two come to terms with the fact life as they know it is at an end.

While that all probably sounds horrifically dour, writer/director Lee Chang-eun expects us to take heart in the movie's fundamentally irrational optimism. He's actually fairly successful at this. One stand-out sequence in particular revolves around Nam-bong and Mae-ja communicating to each other with notes, as the married couple can't be sure whether their better half is lucid at any given moment.

For them, the dementia problem is a testament of their faith, commitment, understanding, and above all else, love in each other. I like to think of the aforementioned note-taking montage as being their hazy memory of what life has been like for an ambiguously defined length of time. Where "Romang" itself is structured vaguely, with some events happening nowhere and without explanation, it's easy to see the parallel in that Nam-bong and Mae-ja themselves are now seeing the world this way. The feelings they have for each other are the only ones strong enough to consistently express dominance over their enfeebled mental states.

"Romang" also has a strong sense of mortal destiny underlying its inherently sad story. The perspective characters are less Nam-bong and Mae-ja as they are Jin-soo and Jeong-hee, who look at the older couple and see not just beloved parental figures, but an ominous vision of the future. Decreased mental faculty is the fate that awaits all of us, assuming we're able to evade a more suddenly ruinous end. That some of Mae-ja's early degradation makes immediate reference to a family tragedy is inevitable. We all have those. But do we all have the strong, timeless love that Nam-bong and Mae-ja have for each other? If only we all could be so lucky...