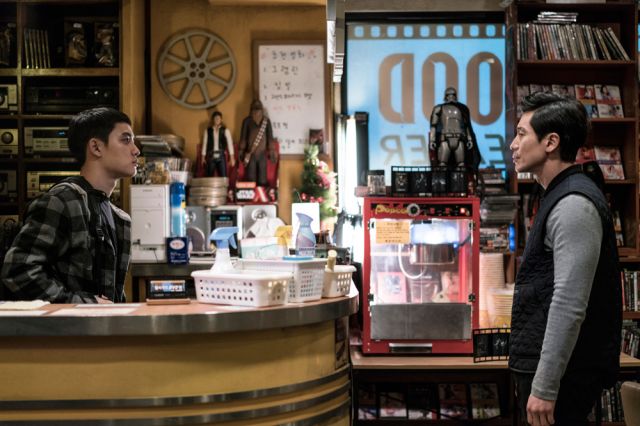 Doo-sik (played by Shin Ha-kyun) owns a DVD room in a generic shopping district. Business is passable, but Doo-sik is in his forties and painfully aware that he has already wasted far too much of his life there and wants to sell. Doo-sik's employee Tae-jeong (played by Do Kyung-soo) also suffers from financial issues and is desperate for some kind of solution. Only the new guy, Chinese immigrant Han-wook (played by Kim Dong-young) is at all happy with life in South Korea.

That fundamental irony is the heart of the film's thematic conflict. Han-wook is surprisingly easy to please, even though his status as an immigrant means that technically Han-wook is in a far more precarious financial situation than either Doo-sik or Tae-jeong. The Korean characters are constantly at odds with their desire for more. Han-wook is happy with whatever he has. So it is that the Koreans have ethical lapses in the course of their monetary frustration, with Han-wook suffering the brunt of the consequences.

We kind of feel bad for Doo-sik and Tae-jeong because their situations are not very good and also not really their fault. Yet at the same time, Doo-sik and Tae-jeong never show any sympathetic personality traits. To the contrary, their formerly stable relationship as manager and employee is pushed to an increasingly psychotic breaking point as both of them become obsessed with the titular "Room No.7" for completely different reasons that they can't simply explain to one another.

At its best "Room No.7" shows shades of the same dark humor that characterized "A Hard Day" from a few years back. Because neither Doo-sik nor Tae-jeong are all that competent or noble, there's definite sadistic pleasure watching them stumble from scene to scene in a desperate attempt to solve their problems. The fact that, as often as not, they just end up making bad situations even worse, only accentuates the humor.

The main shortcoming to "Room No.7" is that the two leads lack much screentime together. Doo-sik's more eccentric personality, especially his random bursts of insecure anger, is such that Doo-sik pulls in all the laughs, while Tae-jeong is left playing the straight man. They're great when they can play off of each other- the screwing scene is my favorite, with its perfect mix of Doo-sik gesticulating wildly while Tae-jeong desperately tries to be inconspiscuous. But then Tae-jeong ends up spending so much time intentionally trying to avoid Doo-sik that the more desperate man is mostly just off in his own little world.

The ethically challenged nature of the main characters in contrast with the generally comedic tone is also a problem. The ending, with Doo-sik's sudden burst of tears and Tae-jeong's decision to find a new life for himself, feels out of place because these are moral reactions from characters who until that point never put much thought into morals at all. The stinger actually ends up being the better conclusion, with its implication that the DVD room itself is cursed. Not by, like, a ghost or something, unless you're counting the spooky ghost of capitalism.