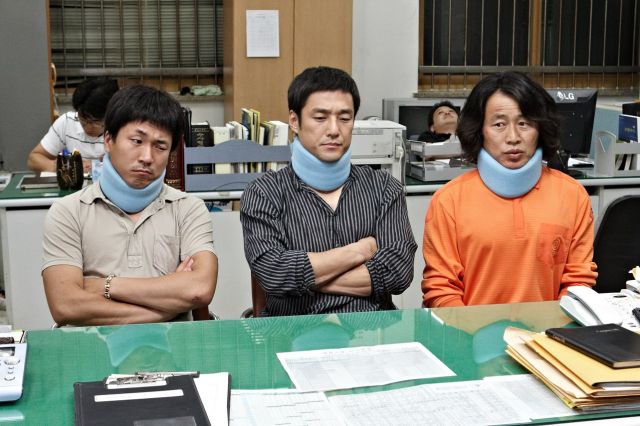 Seong-hee (played by Ji Jin-hee) is a music critic who's a bit of a snobbish jerk. Observe how he requests a divorce from his wife Yeong-sin (played by Kim Yeo-jin) in a public context, and is then hilariously upended by her own inconsiderate plans ahead of time that Seong-hee failed to properly acknowledge. A pity Seong-hee's not as smart as he thinks. So it is that Seong-hee must team up with his best friend Dong-min (played by Yang Ik-june), who as Yeong-sin's ex-boyfriend, has a few leads.

"Runaway from Home" is a road trip comedy about a couple of obnoxious guys who talk and act like it, even when it so happens that they should have the sense not to do so. They learn no world-shattering secrets about Yeong-sin's secret life along the way. Actually, most of what they learn about Yeong-sin is stuff they both should have already known about. It's just that as men, they're full of bluster and not so great at interpersonal communication.

Observe how one such adventure takes them to an event that could most accurately be described as a scam. Seong-hee catches on. Dong-min does not, and seems to take joy simply in being excessively contrarian to Seong-hee's overall attitude of hating fun unless it's mean-spirited somehow. All the leading men in "Runaway from Home" suffer nasty physical injuries sooner or later, because they keep getting caught up in unnecessary battles.

And that's what makes Yeong-sin different. What Seong-hee and Dong-min discover on their trip is that Yeong-sin has had some pretty difficult times in life. Yet she was consistently a kind, sympathetic person to all the people that she met in a way that's reasonably uplifting. Yeong-sin is the kind of woman who would shoot off at a moment's notice to help an old friend in trouble, and this is why so many of her compatriots that Seong-hee and Dong-min run into are willing to help out. They were inspired by her example.

"Runaway from Home" doesn't make Yeong-sin out to be some sort of a messianic archetype or anything. It's really just more simply that she makes the effort necessary to be a good person while Seong-hee and Dong-min squabble over minor stupid favors to each other. Learning about Yeong-sin makes them start to appreciate how petty they really are. Upon finally reaching journey's end, Seong-hee and Dong-min are very quiet having finally had a chance to take this all in.

This is a moral arc that's rather at odds with the often absurd jokes in "Runaway from Home". Note how the first step on their journey has nothing to do with Yeong-sin at all, instead dealing with a bizarre familial obligation that Dong-min has to go through less because he cares and more because he's used to going through the motions. That's not really something to aspire to- at least in the end they finally figure out that we, the viewer, are laughing at them. Not with them.