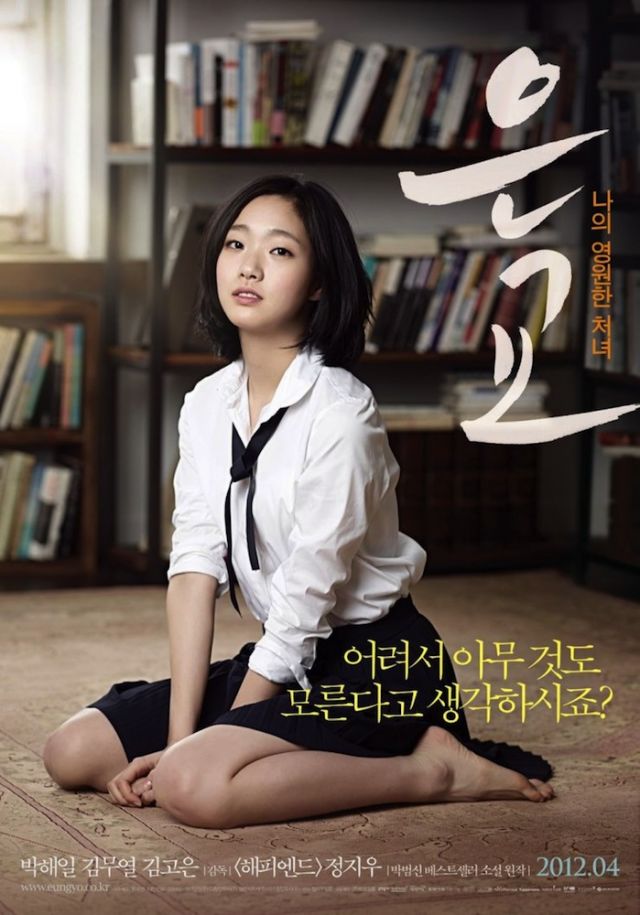 Adapted from the popular 2010 novel "Eun-Gyo" by Park Bum-shim, "A Muse" is a drama at heart that probes a number of social taboos in Korea. Novelist Park and Jeong-Ji-woo collaborated on the actual screenplay together, and although fans of book weren't convinced of some of the decisions made in its adaption to the big screen, the film still has enough excitement and thrills to move it out of the shadow of its paperback cousin.

The films pivots around the retired and respected poet Lee Jeok-yo (Park Hae-il) and his complicated mentorship over Seo Ji-woo (Kim Moo-yul), an engineer turned writer who is attempting to make it on his own now, and a lonely and curious high school girl named Eun-gyo (Kim Go-eun). Lee's house is cabin-like in its location and cluttered aesthetic, giving a strong sense that his castle is slightly separated from the outside world. Here is were most of the intrigue takes place, as Eun-gyo's recent entry into Lee's life has Ji-won uneasy and aggressive towards her. Ji-won sees all the signs he needs to have no doubt that something scandalous is occurring between his father-figure in Mr. Lee, and the cute, energetic, and seemingly innocent Eun-gyo. His concerns aren't completely off base, but the thought of it all causes one of many conflicts within this troubling love-triangle.

However, it is the relationship between Mr. Lee and Eun-gyo that offers the most intrigue and excitement. Jeong Ji-woo and Park Bum-shim have crafted a rich film here that exposes a number of social taboos and strongly questions the social correctness of them. He does this by humanizing their bonds, piecing together a fantasy of a relationship that would simply vanish if the rest of the world were to glance at it. It's their secret, their connections to each other that remain true throughout; but the outside world looms and always threatens to intervene on their questionable relationship.

To analogizing the film's core conflicts, consider the basic principles of consciousness as outlined by the famous psychoanalyst, Sigmund Freud. According to Freud, there are three 'psychic-forces' that exist in our mental involvement in the world, the id, the ego, and the superego. In "A Muse", Mr. Lee is our ego, and he is struggling to find a balance between satisfying his more primitive id needs (i.e. his sexual urges/fantasies towards Eun-gyo) and the voice of the society as the superego (Ji-won, his symbolic son, as he is unable to accept their relationship).

It's a well-crafted story that runs deep with a compelling, yet atypical, human tragedy. The film is also deftly shot, with a number of scenes and moments standing out and really leaving a mark of the viewer. One such scene involves a dream sequence as Mr.Lee is forced to close his eyes as the playful Eun-gyo bends over his face in order to paint on his bear chest. Mr. Lee is soon dreaming of a time where he and Eun-gyo would be able to engage each other without fear. In this scene the line between 'reality' and Mr. Lee dream is blurry and overlaps, challenging society's normative beliefs around sex, power, and relationships.

"A Muse" only pulled 1,343,916 admissions (as of 2012.08.05) during its run in Korean theatres. The film is provocative, sexy, thrilling and pieced together by some highly skilled storytellers in the form of Jeong Ji-woo (who also wrote the screenplay for the comic book adaptation "Moss") and, the original author of the novel, Park Bum-shim. Gripping stuff.

Available to pre-order on DVD and Blu-ray from YESASIA