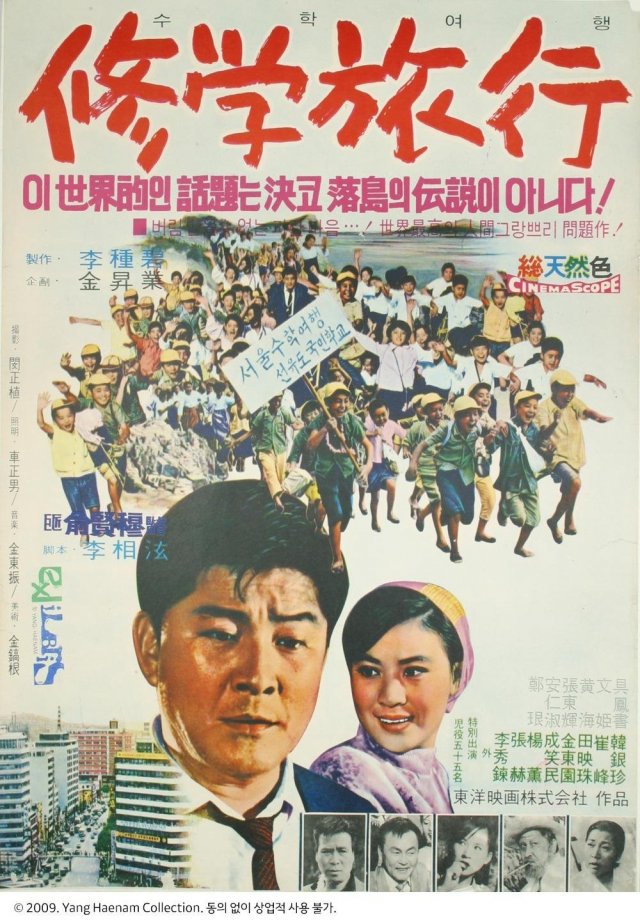 Not as political heavy as his masterpiece, "Aimless Bullet" since the censorship laws in 1969 had become much stricter, "School Excursion" deals with is subject it much "tamer" fashion, but Yu Hyun-mok still managed to include some segments of criticism, although in very subtle fashion.

The film tells the story of the school students of the remote and quite poor island of Seonyu-do, , and of their teacher, Mr. Kim, who struggles to take them on a trip to Seoul, in order to watch firsthand the progress the country has been experiencing, and has not yet reached the island. The film is split in two parts. The first one narrates the way Mr. Kim finally manages to achieve his and his student's goal, while it also functions as a tour guide to the beauties but also the hardships of living in such a poor place. The second and the most central one takes place after the students arrive in Seoul, and the various "adventures" they get into.

In that fashion, the narrative also functions in two levels. The first one is a children's comedy, with the shenanigans and the country-bumpkin nature of them resulting in a number of hilarious, like the one with the kind who is obsessed with wheels and any vehicle in general, or another one who decides to sleep in a bathtub.

The second is the social film, which unfolds into two levels, one evident, and one underlying. The evident, most probably encouraged by the authorities deals with the "miracles" of Korean economy, including architecture (the skyscrapers), transportation, (trains and cars) and industry (the visit in the tobacco factory). The way the children from the island react to all these achievements adds to the comedy the film offers, as I said before, but also steers the audience towards admiration for the government's deeds, in mildly propagandistic fashion and in a style that is somewhat reminiscent of "Tokyo Story". The over-idealized connection the children of the island share with the children from Seoul also moves towards the same path, with the story exemplifying the achievements in the education department, a concept that extends to Mr. Kim's self-sacrificing decision to stay in the island for his students.

This last part is also the first that subtly suggests that this decision could possible not be Mr. Kim's alone, since the logical thing would be to follow his wife and son in Seoul. Furthermore, another, even more subtle critique, this time on industrialization is presented through the tram driver, who expresses his sadness for the retiring of such vehicles, with the children resonating with his feelings even more intensely. In order to appear subtle however, Yu has "coated" the scene with nostalgia, allowing it to appear as something completely different on first look.

Min Jeong-sik's cinematography is also split in two, with the scenes in the island offering a number of images of idyllic beauty, particularly of the sea and the beach, while the ones in the city appear more realistic, occasionally touching the borders of the documentary. Ree Kyoung-ja's editing gives a fast pace to the movie, as the cuts are many and most scenes relatively brief.

Koo Bong-seo as Mr. Kim gives a very convincing performance as a man struggling between duty and will, but also quite determined about his decision. Moon Hee as his wife is also quite convincing as a woman who knows what she wants but at the same time knows she cannot stir her husband towards her needs.

"School Excursion" is a well made film but its true value lies in the creative ways Yu managed to make his critique without the authorities taking notice, but also without faulting the overall quality of the film even for a bit.