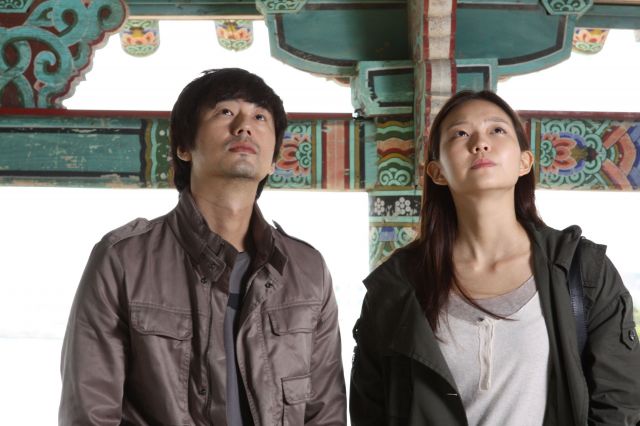 We are introduced to Mr. Jo (played by Ryu Seung-soo) as he is driving and talking on the phone. From the beginning Mr. Jo is not a super likable character. This does not change when he arrives at South Korea's northeastern coast, and starts bitterly criticizing the promotional tactics at a local empty fish restaurant. By the time Mr. Jo arrives at his fancy hotel and meets the oddly familiar Min-ah (played by Esom) we still don't really know what the movie's about.

"Second Half" meanders a lot. Which is appropriate, for the English language title. As a man approaching forty, Mr. Jo is at the age where he's left wondering what he's accomplished in life. The answer? Not much. Mr. Jo works in the film industry. He makes movies, not that they end up doing all that well. Still, movies, and in this specific case location scouting, are the main excuse by which Mr. Jo does anything in life.

So upon meeting Min-ah, and pondering whether he managed to inadvertently create something more substantial than movies that no one watches, Mr. Jo becomes moody and romantic. He tries to be pleasant, and tries to give Min-ah a good impression- not because he's hitting on her but because, well, it's more complicated than that. Min-ah never does figure out what Mr. Jo's deal is. I rather liked how the epilogue was from her perspective, and we see how to her the entire strange experience was just a fleeting anecdote.

Incidentally the Korean title for "Second Half" literally translates as something more like delicious life. Which is also appropriate, in its own way, because most of what Mr. Jo and Min-ah end up doing together is going to random cafes and restaurants. Taking place in late November, Gangreung is not shown during a bustling tourist season, but rather at a time when it's too cold to do anything fun yet not cold enough for there to be, like, snow on the ground so that the countryside is particularly interesting to look at.

You may have noticed that I am also meandering a lot in this review. That's because because "Second Half" never really goes anywhere. Because Mr. Jo is too cowardly to just come out and tell Min-ah the real reason he's tagging along with her, they just end up wandering around not doing too much of anything. Mr. Jo, and by extension the viewer, thus has little to do but pay close attention to specific exchanges that might have a clue which relates to the plot.

Well, except for the times Mr. Jo gets distracted and then it's on to the next round of food tourism. "Second Half" isn't really bad so much as it is pointless. It's Esom's debut, and we can see how even back then she was crafting an image as a vaguely distinctive mystery girl. Which is a pretty pitiful endorsement really. Anyone who's that curious about "Esom"'s career history isn't going to decide to watch this movie based on a review.

"Second Half" is directed by Cho Sung-kyu, and features Ryu Seung-soo, Esom and Na Yoon-sung.