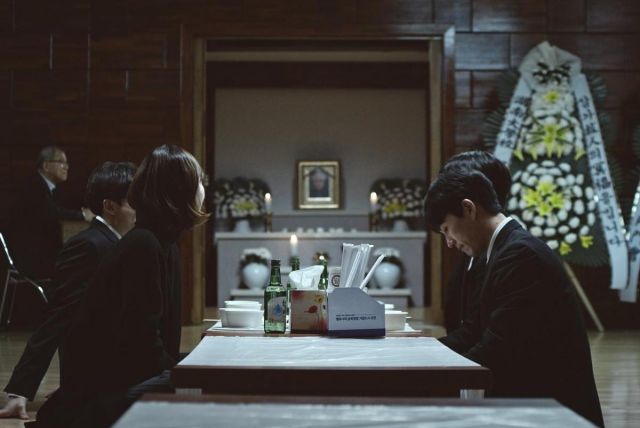 The horror genre has become somewhat detrimental lately, particularly since the number of entries in the category is truly excessive, and everything seems to have already been done. A number of directors, however, are recently making an effort to evolve the particular kind of movies, by injecting social commentary or other elements that are mostly associated with art-house titles, including the overall cinematic approach. Park Kang also follows this direction with "Seire", a title that refers to the period of 21 days in which people are supposed to take utmost care of their behaviors and strangers are not allowed to visit, to protect newborn babies from bad luck, by focusing on the fear of breaking taboos and customs.

Woo-jin is a 30-something salesman, who has just started adjusting to life with a newborn baby in the house, along with his partner Hae-mi. The latter, however, comes from a family whose belief in traditions (superstitions if you prefer) is rather strong, and the concept of the Seire is upheld in the highest degree, even including Hae-mi's sister and her husband, who live on the same floor, and are also not allowed to visit. Woo-jin, however, breaks this taboo by deciding to attend the funeral of his college sweetheart, Se-yeong, with whom he retained a relationship for six years, even lying to his wife about the identity of the deceased. At the funeral, he stumbles upon the deceased's identical twin sister, who seems to know much about him, although he barely knew about her presence and had no clue about how similar she looks to her sister. In the meanwhile, Hae-mi's sister finds out she is pregnant, while Woo-jin finds himself unable to escape the circle formed around the deceased. Lastly, a shop that manufactures herbal tonics for both pregnant women and those who want have an abortion plays a key role i nthe whole story.

Although "Seire" is technically a student film, produced by Korea's National University Of Arts, there is nothing amateurish about it. From the beginning, where the concept of the rotten apple impressively opens the film, writer-director Park Kang creates an imposing atmosphere of disorientation and fear, which continues as flashbacks of Woo-jin's life with Se-yeong, scenes that linger between the dream/nightmare and reality, and an overall sense of eeriness permeate the whole narrative. That something is wrong with Woo-jin becomes apparent from the beginning, but Park Kang takes care of revealing the reasons behind his attitude gradually, as the protagonist finds himself between a woman that he seems to have faulted in a number of ways in the past, and Hae-mi, who considers him completely irresponsible for not adhering to the rules of the Seire.

Through this approach, Park Kang makes a number of comments, mostly focusing on the blights of disidemony, which is still quite prevalent in Korean society, the whole concept of medicinal herbs that are manufactured in ways no one is able to actually check or control, and the difficulties family life can pose for contemporary people, particularly in the presence of a newborn. This approach, which lingers somewhere between the metaphysical horror and the indie social drama is excellently implemented, with Han Jee-hee's editing helping the most in interchanging the scenes that adhere to both styles. This duality also extends to Hwang Gyeong-hyeon's cinematography, with the horror scenes being rather polished and impressively colored in dark colors (with the images of the apples and the blood being particularly impactful) and the everyday life, more bright and visually grounded to realism. This last aspect also has a contextual meaning, since the scenes involving Woo-jin's past relationship take place in the dark for the most part, with the opposite happening with his wife. The switch that eventually takes place in that regard, is one of the most memorable aspects of the narrative. Granted, at some point, during which Woo-jin finds himself lying on the floor, dreaming (?), Kang lost his sense of measure and the balance of the narrative path, but this is just a small error and does not fault the overall quality of the movie significantly.

Seo Hyun-woo as Woo-jin is rather good in presenting how lost and disoriented his character seems to be, while Shim Eun-woo as Hae-mi fulfills the archetype of the nagging wife to the fullest. The one who steals the show, however, is Ryu Abel as Se-yeong, with her being the main source of eeriness in the movie in her double role, emitting a sense of mystery and danger every time she appears on screen.

The overall minimalism with the occasional splashes of visually impressive moments appears to be a well-fitted approach for the "new generation" of horror films, along with the combination of a number of art-house elements, including the richness in context and social messages, which Kang seems to have grasped fully in his impressive debut.