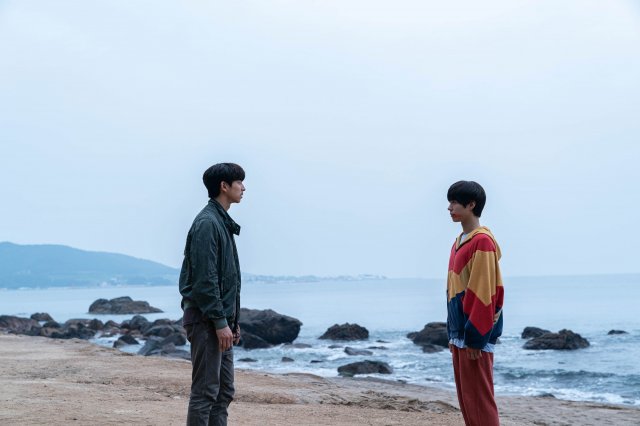 Gi-heon (played by Gong Yoo) is suffering from a brain tumor, and more immediately relevantly, the severe depression that comes along with being forced to confront his imminent mortality. In one of the more striking scenes of "SEOBOK" we see Gi-heon dream of being trapped in a seemingly limitless oceanscape, the vividness of that dream contrasted the bleakness of that reality. As Gi-heon fears death, he becomes the logical champion for Seobok (played by Park Bo-gum), a test subject who might hold the key to immortality. But so what?

That question quietly rages throughout "SEOBOK" as the title character constantly asks Gi-heon what the purpose of life even is. While Gi-heon has the chops to serve as an effective bodyguard, he's ultimately not much for philosophical conversation. Gi-heon can't actually explain why he wants to live. And as time goes by, as we see that Seobok is suffering from his own bleak form of depression, the lack of an answer to this question becomes all the more suffocating.

"SEOBOK" is an all too human movie in a uselessly inhuman world. We're treated to several side sequences wherein antagonists discuss the more existential implications of the possibility that Seobok may end death. But the relevant characters get so lost in their own rabbit holes their motivations digress into utter meaninglessness. Lacking in either malice or empathy, nebulous fear drives their evolving policy toward what to do with Seobok, hopelessly objectifying the young clone.

The grim, impersonal nature of the stakes in "SEOBOK" make for a powerful representation of suicidal impulses. The great irony of the road trip that makes up the bulk of the film's narrative is that, through their emotional connection with each other, Gi-heon and Seobok both find some reason to live, an actual goal beyond just wallowing in their own sorrow. Yet as Seobok gravely notes near the end, ultimately there's nowhere for either of them to run to.

The contrast of plot versus tone in "SEOBOK" is fascinating. On paper the narrative plays out like a supervillain origin story. And yes, I mean supervillain, not superhero. Seobok is a nice enough kid, but he fully understands that there is no noble cause he can serve. Seobok's choice is to either live out his life in perpetual pain in the name of assisting monstrous people in ethical goals they don't actually believe, or to just be left fighting them, forever and ever.

There's no more prescient metaphor for depression than that, even if most sufferers of that affliction just have to deal with their own internal demons, and not a literal army of soldiers. In the absence of a compelling reason to live, neither Gi-heon or Seobok can truly save one another. This is what we're left to contemplate in the final shot, as our hero is forced to acknowledge that he has by no means conquered depression, but only won a brief reprieve with oblivion still to come.