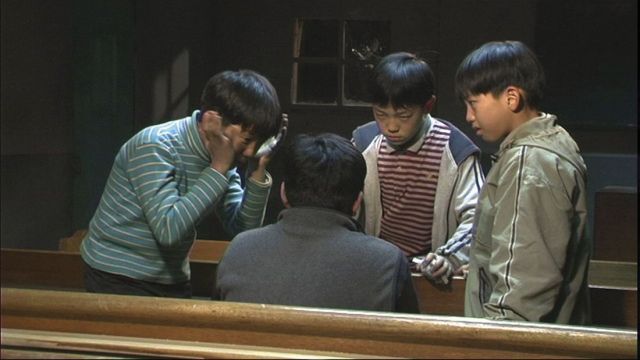 Sung-il (played by Jo Hyeon-sik) is a boy with no parents and a famous name- Shin Sung-il, you see, was a famous movie star who once appeared in hundreds of classic Korean films. What does this has to do with "Shin Sung-il is Lost"? I have no idea. "Shin Sung-il is Lost" is one of those movies that's more focused on ideas than story. There's a lot of backdrop and exposition that's shaped like a plot, but it never ends up going anywhere.

Take the orphanage where Sung-il lives. It's managed by a religious organization that has interpreted Scripture to read as being against the ingestion of food- forgive us our daily bread and all that. This, incidentally, is why translations should not be trusted literally. Sung-il is a most fervent believer in the doctrine of always having to go fast, and yet for all his self-imposed starvation, Sung-il is among the chubbiest kids at the orphanage.

With a world so obviously and deliberately weird, writer/director Sin Jae-in could have easily gone for any kind of more coherent story. And yet "Shin Sung-il is Lost" lacks clear structure. Rumblings of a conspiracy by the children to take over the orphanage don't really progress in linear fashion but rather in jumping starts. Which is appropriate, because if you ever were a kid you probably know that elaborate plans to escape or rebel from authority figures never really go anywhere because kids are kind of dumb.

Instead, most of the focus is on Sung-il's "suffering", if you really want to call it that. As obviously weird as the anti-food cult is the children never really struck me as any more or less grumpy than regular orphans. Their brief pivots from black-and-white to color cinematography appear to indicate greater realization of alternative explanations more than genuine discoveries of an as-yet unknown and magical "Real" world. A foray into the restaurant dotted city only exposes such lovely ideas as transient public drunkenness.

And yes the quotation marks are necessary. Like any abstract concept "Shin Sung-il is Lost" is trying to challenge our ideas of what is real and what is not real through the device of Sung-il's journey. The fact that this journey never goes anywhere is besides the point- one line suggests the prospect of a sequel that was never made, although this might have been a joke. In any case, stick around after the credits for a rather lucid synopsis of what happens during the course of the second movie.

As to whether "Shin Sung-il is Lost" part I is worth watching, well, that will probably depend on your sense of humor. Do you like the concept of anti-food religion so much that you want to see an entire movie that revolves around the concept, and don't even care whether or not there's any actual point to the narrative device? If so then you'll certainly get what you're looking for out of "Shin Sung-il is Lost". For everyone else, the film is a novelty- a weird idea worth watching mostly because ideas this weird don't come along that often.