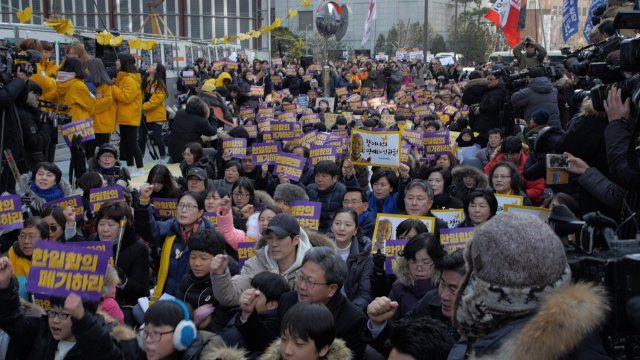 One time Japanese-American director Miki Dezaki posted a basic educational video to YouTube. The video made offhand reference to comfort women and some American dude who calls himself Texas Daddy yelled at him about it in his own YouTube video. Why would an American be offended by a Japanese-American guy talking about comfort women? Miki Dezaki had no idea, since he didn't really know much about comfort women in the first place. So he started investigating.

"Shusenjo: The Main Battleground of the Comfort Women Issue" covers a lot of ground. Considering the documentary's two hour running length there's surprisingly little wasted time. Indeed, if anything it's easier to quibble about the stuff Miki Dezaki doesn't talk about, just because nearly every single question he asks just begs more and more questions and a surprisingly large number of people are willing to be interviewed by him.

For those who deny Imperial Japan's complicity in comfort woman crimes there's quite a lot of nuance. They dispute the scale and purpose of the various wartime brothels across the Pacific, and the culpability of the Imperial Japanese government in obtaining prostitutes to staff them. They do this for typical nationalist reasons of insisting that Japan has done no wrong and it's those nasty Koreans spreading lies about their good reputation.

Naturally it was a bit of a rude shock for Miki Dezaki to go to Korea and find that the comfort women issue is only marginally seen as a nationalist issue at all there. It's promoted mainly by feminists in the greater context of human rights. And it's not just in Korea either. The most informative interviews of the documentary are with a Japanese feminist who has kept track of how many camps there were and how many people were in them. She has a big map and detailed explanations for where all her data came from.

The reactionary Japanese activists, by contrast, have some data which bolsters their ideas- but only if you accept certain ridiculous assumptions like how the Japanese military is incapable of intentionally committing crimes against humanity. Once this becomes more clear, it's easy to see how various random Americans got roped into this anti comfort woman ideology. In one telling Freudian slip, a white guy makes reference to the American military before correcting himself. Because really, for a person who believes that the American military is incapable of committing crimes, granting the same wide berth to the Japanese military of yore isn't that big a leap.

But by and large "Shusenjo: The Main Battleground of the Comfort Women Issue" explores its topic through the conservative Japanese point of view and goals. These take on a surprisingly wide angle, as Miki Dezaki finds Shinzo Abe's government in the thick of basically everything. Then there's the money man behind the entire reactionary movement, who Miki Dezaki gets to interview and uh...well, I don't want to spoil it, but he's not the evil mastermind you're probably expecting. Really, just watch the documentary yourself. Miki Dezaki explains it better than I could.

"Shusenjo: The Main Battleground of the Comfort Women Issue" is directed by Miki Dezaki. Release date in Korea: 2019/07/25.