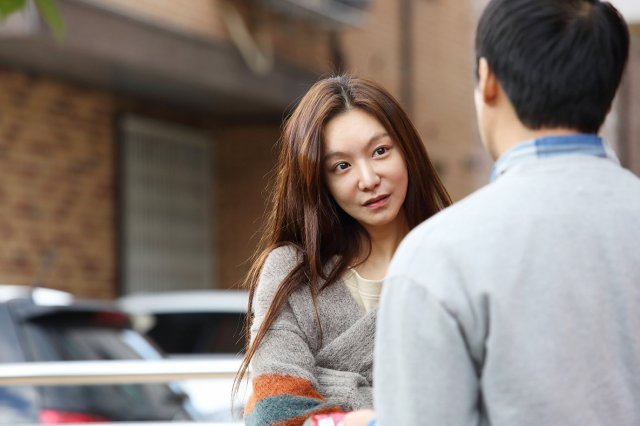 In Incheon, film director Kyeong-tae (played by Oh Tae-kyung) arrives, massive backpack in tow, and sets off by bus to the next stage of his journey. This turns out to be the outside of the apartment complex where his illustrator ex-girlfriend Da-woon (played Shin So-yul) lives. Kyeong-tae sets up a tent there. Da-woon is, understandably, perplexed and angered by behavior which she interprets as stalking. So it is that "Si, Nario" rather auspiciously begins with the question of why Da-woon doesn't just call the police.

Now having seen "Si, Nario" all the way through, I can gave writer/director Kim Dong-won-I a little more credit than I did at the outset for this premise. The movie isn't quite as creepy as it sounds in execution, although it takes quite some time for us to get to the point that Kyeong-tae's actions can be interpreted beyond that. It especially doesn't help how Da-woon's own friends and acquaintances seem to enable Kyeong-tae's behavior, to the obvious distress of Da-woon.

The reason I can only give "Si, Nario" a little credit as opposed to actually liking the movie is because I can see what the script is going for and I disagree more due to ideological reasons than any explicit flaw in the movie's construction. "Si, Nario" is about the appeal of finding closure in a relationship. That's what Kyeong-tae is after more than a misguided desire to start the relationship back up again. Well, except he does kind of want to start the relationship back up again...

That's a big part of why I don't like this outlook toward failed relationships. There's no such thing as closure, and Kyeong-tae never really convinces us that there is even if he is eventually able to convince Da-woon's friends of that point. To be honest I'm less sure that Kyeong-tae convinced them of that as I am that they convinced him of that, by just showing such consistent, sustained interest in Kyeong-tae's backpacking story that he sincerely started to believe it.

The main obvious flaw in this whole situation is that we have to assume that Kyeong-tae is a decent person who's not inherently dangerous. And given the limited context within which "Si, Nario" opens there's little reason to assume that. The movie's whole set-up could easily be repurposed into a horror film. I rather suspect that this more naturalistic use of the premise would have led to a better movie, rather than one that feels constantly at cross purposes with itself.

The sweet reflective style of "Si, Nario" is similarly frustratingly disarming. I know how awful the overall situation is and yet writer/director Kim Dong-won-I makes the story feel so cute in context I feel like I have to cut Kyeong-tae some slack when he obviously doesn't deserve it. Even now I'm left wondering if there's a gender issue at play. I would not begrudge any female film critic for reacting to this movie with far more hostility than I was willing to.