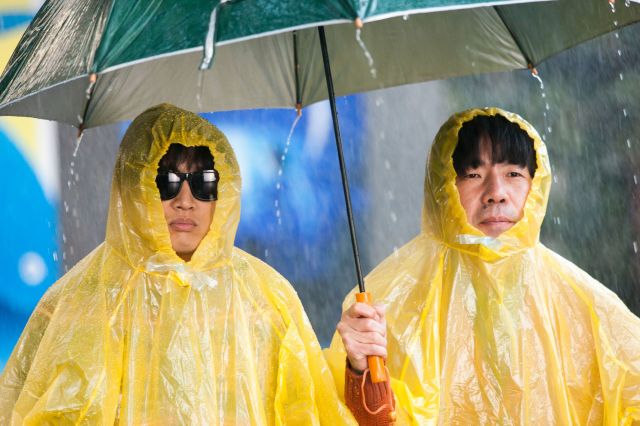 The heavily bespectacled Jang-boo (played by Cha Tae-hyun) initially looks like a blind guy. However, narration and flashback soon makes it clear that Jang-boo's problem is not that his vision is too weak, but rather, that it's too awesome, because he can process everything in slow motion. Alas, actually using this power, or even just trying to use his eyesight to do boring normal everyday stuff, is burdensome to Jang-boo. So instead he uses this power to stalk Soo-mi (played by Nam Sang-mi) via closed circuit television.

OK, sure, I get it, the movie's being romantic. But still. As presented here, Jang-boo's behavior is pretty creepy. It especially doesn't help that Oh Dal-soo has a prominent, if mostly pointless role as a work friend that Jang-boo doesn't really like all that much. Is it fair for me to attack "Slow Video" for a sexual assault scandal that came out years after the movie was finished? Obviously not. The problem is, "Slow Video" is so bland I didn't have much else to think of.

Bland is really not the word you'd expect to describe a movie with superpowers and stalking but then that's what makes "Slow Video" so weird. The movie never really commits to any part of its premise. At the midway point we get a pretty great scene where Jang-boo reveals his powers and immediately uses them to perform silly party tricks at a giant drunk party. Then at the beginning he single-handedly hunts down an obscure motorbike that everyone else just assumed was gone forever.

Aside from scattered moments like this, though, Jang-boo never really does anything. Even when pursuing Soo-mi he is a frustratingly passive protagonist. Weirdly enough, Soo-mi as an object shows much better drive and ambition, because she has actual problems. Soo-mi is getting old, yet is no closer to making headway in auditions. Her financial condition is not stable. Past men in her Soo-mi's life haunt her. And of course there's that weird sunglasses guy who's stalking her.

But what makes Soo-mi interesting is that she tries her best to take this all in stride. And for the most part she succeeds, even if there are almost as many moments where we see her just at the edge of losing her temper. Soo-mi is a fully defined character, right down to her frizzy hair, goofy vintage wardrobe, and tendency to stop in the middle of the street just to avoid breaking concentration.

Unfortunately none of this culminates in an actual point, because neither Soo-mi nor Jang-boo has a meaningful narrative goal they're working toward that they're willingly to openly talk about. The result is a romantic comedy where the first act is way too long and the ones that follow it don't build up on the premise. "Slow Video" does at least manage to be an interesting failure- the unique premise and attempted melding of genres is certainly original, I'll give it that much. Be that as it may, an interesting failure is still a failure.