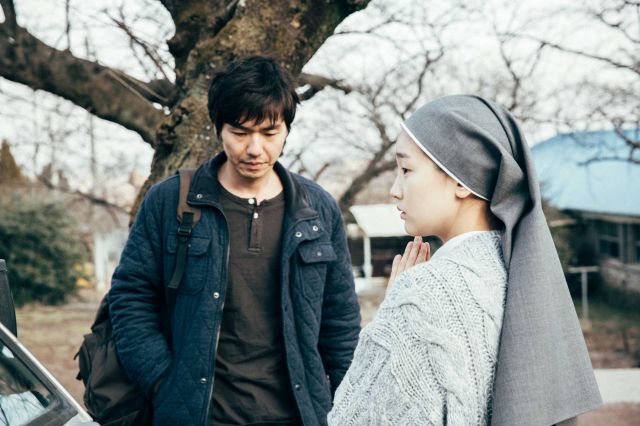 Jeong-woo (played by Kim Tae-hoon) is a struggling alcoholic. He ends up taking temporary residence at a convent in the hopes that maybe an alcohol free environment will force him into sobriety. Maria (played by Park So-dam) is a young nun who suffers from her own mysterious problems. Together, they faintly interact with one another, unsure of what awful secrets lurk behind each other's mental afflictions.

"Snow Paths" is continuously vague in this way when it comes to its own character conflicts. Which is appropriate, since spiritual emptiness is largely characterized by a constant feeling of uncertainty. Jeong-woo needs to be pushed into going to the convent, mostly because he needs some sort of reassurance that another person cares about him enough to force the man to do things he doesn't particularly want to do. Maria puts on a cheerful face, although she was clearly forced to take up the veil. Not by militant nuns, mind you, but something much worse.

For all these issues neither Jeong-woo nor Maria ever approach genuine self-destruction. Observe the guilty way Jeong-woo attempts to pilfer liquor. Even in his most desperate moments, Jeong-woo never really wants to relapse. He's just searching for a higher power (in this case the nuns) to demonstrate that alcoholism is nothing unusual or earth-shattering and that given time, he can be cured.

What complicates this relatively straightforward story of attempted sobriety is Maria. It's not a matter of romance, but rather that her ominous backstory dovetails a fair bit with Jeong-woo's and somewhat unintentionally undercuts the thesis that alcohol is Jeong-woo's only problem. The more sober Jeong-woo gets, the more the man suffers from odd hallucinations which are notable mainly for being understated. A little upward movement here, a little darkened tint over there, the camera moving out of Jeong-woo's range of vision and bam, there it is. Serious spiritual doubt.

Exactly the kind of doubt, I might add, which most likely got Jeong-woo into alcoholism in the first place. But I should warn you that the answers which "Snow Paths" offers to its own strange mystery are less than fully satisfying. There's only one scene which involves any particularly decisive character action. What's more, the main catalyst for the crisis is less the story's overall spiritual underpinning as it is the presence of a very mortal weapon, and the subsequent unwise use of it.

This puts "Snow Paths" in the rather strange position of being a film that has a great deal of substance yet almost no material story. Its characters struggle with trying to find some meek quantity of friendship in a huge sea of loneliness. They sort of succeed, and yet the ending makes it clear that most of the substantative issues remain unresolved. Possibly permanently, since Jeong-woo loses the only mechanism he had to figure out what happened to him way back when. Which I suppose in the end does still work as a metaphor for sobriety. You can never really recover from alcohol addiction, after all.