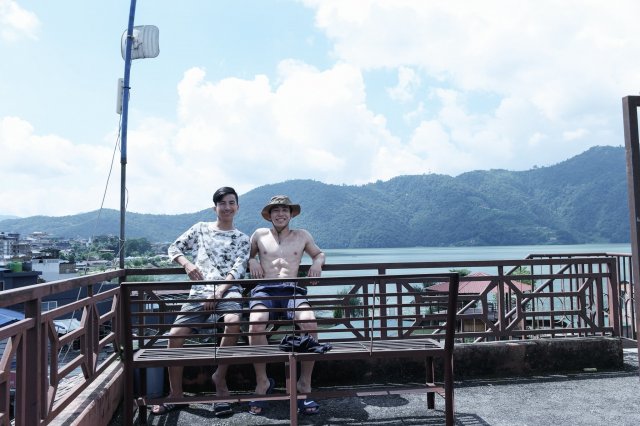 Directors Lee Sang-mook and Ma Young-min had a dream of traveling internationally. The problem was, they didn't have any money. So to get funding, they formed a corporation by the name of "Social Nomad" that solicited donations in exchange for promised content. Then, in order to actually go traveling, they sent out e-mails to hostels and travel agencies in order to further sponsor the trip, in exchange for the team producing promotional videos for the places where they stayed.

If none of this sounds terribly interesting, well, I can assure that you that it is not. While you might expect that "Social Nomad" is a travelogue, it's fully framed by the context of Lee Sang-mook and Ma Young-min following their dreams of going on a worldwide vacation. While it's sort of impressive that they managed to find a way to afford it with limited financial resources, nothing about their story is particularly noteworthy, and the documentary itself exists largely because Lee Sang-mook and Ma Young-min promised to make it.

Much of the footage, after all, isn't even slightly polished, but rather just about what they did on their vacation. Apparently people do a lot of hiking in Nepal. Unfortunately for the team behind "Social Nomad", they failed to take the weather into account, so there was a lot of rain. And the facilities were often not the best that could be hoped for. At one point there's an almost apologetic remark about how the lack of expected working power outlets means no more filming for the foreseeable future.

The further countries visited after Nepal are even less distinctive. They go to Hong Kong, where the guest house they make a video for has a pool. I think they go to Cambodia after that, although I'm not totally sure. There's three countries in Europe, followed by the United States, but as the documentary drags on there's so many indoors scenes I'm not completely confident what happened where, or whether anything really happened at all.

The single weirdest aspect of how "Social Nomad" is framed is that Lee Sang-mook and Ma Young-min appear to be interested in traveling just for the sake of traveling. It's a completely abstract, arbitrary goal that exists for its own sake. So in a fairly roundabout way "Social Nomad" actually manages to perfectly exemplify the main criticism I have of traveling culture. Namely that there just doesn't seem to be any point to it.

This is my personal observation about traveling, having at one point gone on an extended traveling trip myself just to see if I was wrong. Much like the "Social Nomad" guys, I also wrote about my experience of stumbling from place to place with little money on this very website, under the title of HanCinema's Korea Diaries. I'd like to think that someone learned something about Korea from those articles. At the very least they had some pretty pictures. Unfortunately "Social Nomad" doesn't even have that much.