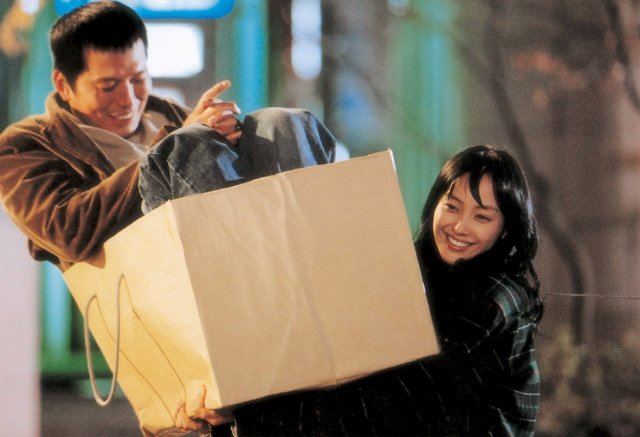 You know how in a lot of romances the guy seems like an indifferent jerk, but as we get to know him, we see that his inner thoughts are actually quite complex? "Someone Special" subverts this idea right away when its lead character Chi-seong (played by Jung Jae-young) gets some bad news, and while he looks stoic on the outside, on the inside, we can see that he wants to throw a temper tantrum. This character trait recurs as Chi-seong is thrown into increasingly frustrating and implausible contrivances. Even meeting I-yeon (played by Lee Na-young) is of little help.

Who is I-yeon? Why, she's the bartender who just so happens to have a long-winded personal backstory that revolves around Chi-seong. There's something horribly dark about the first scene we get with I-yeon alone, as she just breaks into tears walking along by herself. This peculiar moment is played for serious drama, which is odd given how it's bookended by a perplexed Chi-seong not having any idea who she is.

There's nothing dramatic in this by the way. Chi-seong forgot who I-yeon was because he's a normal person who doesn't remember much. That's the main gimmick and joke "Someone Special" has going for it. Where women sometimes fantasize that their unremarkable boyfriends are the stars of epic romantic films, "Someone Special" features an unremarkable boyfriend who is forced into an epic romance against his will. Consequently, Chi-seong alternates between rage and bewilderment at how ridiculous everything is.

By all rights "Someone Special" should be a parody. What makes the movie stop just short of that is everything aside from Chi-seong himself is for the most part played seriously. Well, within limits. Think of it this way. Yes, there are such things in the real world as life-ending medical diagnoses, serial burglars who mean well, or ex-girlfriends popping up out of nowhere. But if you or me were to be faced with such a theatrical situation, we would not be able to engage with it as reality. We'd constantly be thinking about how someone must be playing a cruel joke on us.

I-yeon with her cheerful disposition illustrates another way to look at these strange turns of events. She remains unflaggingly optimistic and cheerful, a totally supportive girl friend to every possible plot twist. I-yeon does not see the obstacles in Chi-seong's life as outrageously improbable contrivances, but as obstacles to be overcome on the road to happiness. Chi-seong puts up with this because, well, what other choice does he have?

I am reasonably sure "Someone Special" is intended to be ironic. But its relevancy in this day and age is dubious. To really get how well "Someone Special" is playing around with melodramatic tropes, you need to have a pretty good idea what a normal serious South Korean melodrama from this time period looks like. Because if not, you're likely to go through this movie just as bewildered and irritated as Chi-seong, by the lack of any obvious point. Although really, let's be fair. Life or death in the real world doesn't have any obvious point either.