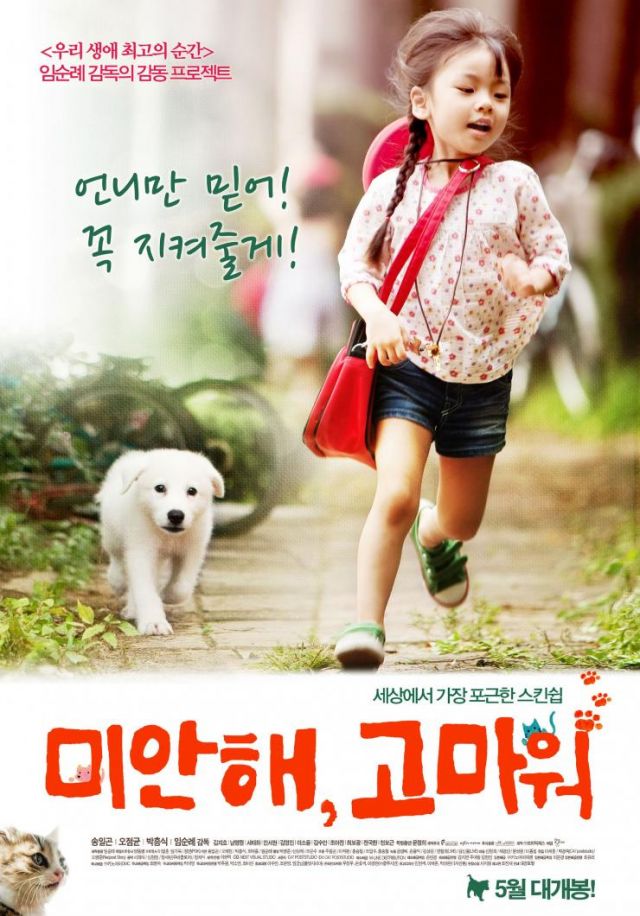 Animal rights may not be on top of Korea's list of social issues, as many people in Korea are not fully educated about domestic animals or have experience with pets in general. Perhaps it stems from the fact that a large percentage of Korea's population lives in cities and places that are generally ill suited to owning a dog or cat. "Sorry, Thanks" is an omnibus film that contains four short stories about animals (more specifically dogs and cats) and their relationship with Korean society. The film highlights a number of existing social issues surrounding these animals, but the film mainly speaks of animal abandonment, social neglect, and the lack of appreciation and experience people have with of animals.

The three directors involved in this project are Yim Soon-rye, Oh Jeom-gyoon, Park Heung-sik and Song Il-gon. The filmmakers are apparently known for their involvement with animal rights groups, with Yim Soon-rye being the advocate for Korean Animals Rights Advocates. That said, the film acts attempts to raise awareness on the issue of animal abandonment by touching on various social perceptions on pets and the treatment of animals.

Some of these include the suspicious manner in which cats are perceived, with them often being viewed as pest or bad omens. In the film Yim Soon-rye's "Catty Kiss" shows a young women who has committed her life to looking after the neighbourhood street cats. She sneaks out at night and leaves food and water for them. She also tries to catch them in order to have them neutered and check over for diseases. In this short the women has to battle society's perceptions of cats, with the brunt of her battle occurring through her own father whose traditional nature and personal history with pets seems to be almost non-existent. In fact, all but one of shorts contains, to varying degrees, the idea that the older generation in Korea are not as accepting of pets as perhaps the younger generation is.

Another common reason for pets being abandoned is that young families often get a dog or a cat, but soon afterwards decided that it is not for them or that their lifestyle doesn't allow for it. In "My Younger Brother", a young girl truly believes that her little puppy is, in fact, her little sister. She loves and plays with him as if he was really her sibling and best friend. Sadly though, when the parents are expecting another child their grandmother convinces them to give to the dog to her, deeming it unsuitable to have a puppy with a newborn. The grandmother shows no love towards to the puppy and quickly loses it on her way home. The short concludes with a rather disturbing image of the puppy (shown at this time as a little girl) being stolen away by a man on the street and taken down a dark tunnel, presumably to be possibly beaten and eaten or otherwise mistreated.

"Sorry, Thanks" is a tricky film to comment on as its aims of social awareness towards animals didn't always translate or was otherwise misrepresented. The film is actually less about the animals themselves, and rather about human relationships. The first short, entitled "Sorry, Thanks", tells of conflict between a father and a daughter who is in financial difficulties. The father owns a beautiful dog (played by Ha Neul-i), but when he suffers a heart attack his daughter battles with the notion of giving him up for adoption. After a heartfelt moment where she rediscovers her dead fathers love for her, she decides to keep the dog instead. Here the dog is less the crux of the story than it is a hinge. The dog is vessel for her fathers love, but the actual dog is not really seen as meaningful or desirable.This brings me to my biggest issue with the film as a whole. Although the film intended to portray animals as worthwhile and worthy of love, respect and attention, there was a strong disconnect between those goals and how the relationships between the animals and their people panned out. I saw very little true companionship in the film, with animals and people being in a healthy and loving relationship. The first short, "Sorry, Thanks" did contain this, but unfortunately it was used as entry point to conflict between the woman and the decision to adopt the dog. Even the second story, "Joo Joo", ended with fleeting appreciation of the possible companionship dogs can provide; but again the dog was used to project the homeless man's own feelings and place in society.

I come from a country where animals really do become part of the family and where the saying "dogs are man's best friend" rings true. In this light I found "Sorry, Thanks" to be an uninspiring effort that did not fully encompass the joys and love man can have with animals. In my experience, I have become saddened by how animals, especially dogs and cats, are treated and viewed in Korea and I believe this film does little to change that perception. Even with that social message aside, the film in its own doesn't allow one to walk away with any heartfelt understanding of the relationship that exists between pets and their owners. As such, it becomes more of social exposition of people's relationship with pets in Korea, which is far from ideal as many people in Korea lack exposure and experience with pets in general. If you are looking for a fuzzy and uplifting tale that beautifully captures the love that exists between people and their pets, this is not the film you're looking for.