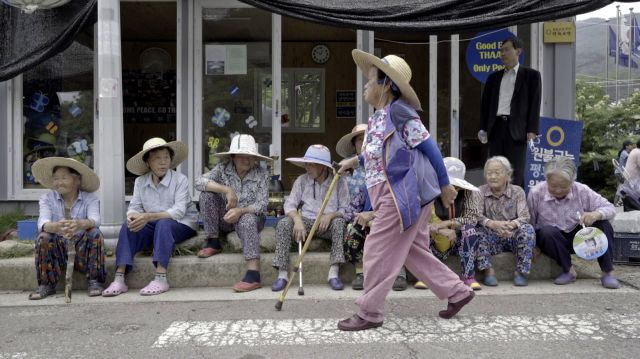 In the outskirts of Daegu, roughly equidistant from Seongju, Gimcheon, and Gumi, "Soseongri" is a rural farming district that's not too different from most others in South Korea. The population consists almost entirely of old people. Director Park Bae-il asks the old women there about their life stories, and they tell it, in between long shots of their everyday life of wandering around from place to place.

It should come as little surprise that "Soseongri' is a political documentary, given that director Park Bae-il also made "Miryang Arirang" which similarly featured elderly people turned protestors in the face of unilateral government decree. Where the women and men of "Soseongri" differ from those of "Miryang Arirang" is that they're presented here as mostly just sitting around minding their own business. It takes awhile for any kind of conflict to show up.

And even then, the main strong political opinion the elderly people of "Soseongri" have is that war is very bad. This is based on their firsthand experiences during the Korean War where they remember lots of stuff being blown up and lots of people being killed for no apparent reason. Communists were not responsible for that surprisingly enough. The main narrative we see on the subject notes that, obvious ulterior motives notwithstanding, the communists were content to just hang out in their office and requisition funds for construction projects. Several of the buildings made from that project are still in use today.

"Soseongri" is an extremely local story and through this we can see how it has informed the attitudes of the entire community. There's also one in here about a three year old boy who died not from an inflicted wound but just from sheer shock at war existing at all. A more light-hearted vignette is about how married women were so used to being described as their husband's wife or their child's mother that even their mail was addressed like that. There was a minor revolution involved in several women deciding to aggressively use their own names.

These are typical Korean grandmother stories for the most part. In between that and the very steady camerawork, "Soseongri" is very much the kind of documentary that's good at expositing subtleties and atmosphere. Take another scene, where a man and woman bicker because the man has woken up in the wrong house. There's a lot of open, frank talk because that's just the social environment that these people live in.

Consequently the transition to explicit documentary is very awkward, albeit deliberately so. Some aspects, like how the police are aggressive with geriatric left-wing protestors yet act as bodyguards for the younger right-wingers, are not surprising. I was more intrigued to realize that the right-wing speeches were an unintentional distorted parody of how the elderly locals speak. The right-wingers deliberately invoke classical propaganda vocabulary and old dialectical speech to try and build up an appeal to authority. They sound even more absurd than usual right after having listened to the real thing.