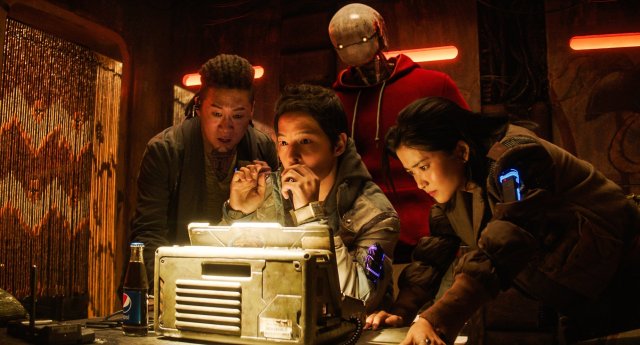 I expected "Space Sweepers" to have some exposition at over two hours. But I was caught off guard by the sheer quantity of badly paced infodumping. It takes ten minutes for us to be introduced to the spaceship and its crew amid constant infodumps about the worldbuilding. At the twenty minute point they get a goal, requiring more exposition. Incredibly, there is yet more exposition and backstory well into the second half, every single time dragging the narrative to a crawl.

A better movie would engage in some minimalism and maybe not have the need to compulsively explain everything. Yet writer/director Jo Sung-hee refuses to leave anything to the imagination. I still can't believe that "End of Animal" and "A Werewolf Boy" both came from this same guy. Those movies are classics in part because they avoid backstory, leaving several supernatural elements as deliberate mysteries even by the film's end.

But in "Space Sweepers" the detail is just plain nauseating. Tae-ho (played by Song Joong-ki) is a former child soldier turned special forces operative who somehow quit his job despite living in a cyberpunk dystopia and lost his adoptive daughter to a horrible accident and is now forced to search for her body through space junk with economic conditions making this extremely impractical. A good movie would just imply the important parts of this with offhand dialog and good acting.

"Space Sweepers" instead forces us to watch all of this get explained, up to and including an entirely unnecessary preexisting relationship with the villain, himself another character whose pointlessly convoluted backstory could easily have been edited out. And so much of the plot of this movie is stupid too. Nanomachines work like magic, up to and including letting people talk to the dead. The evil corporation controls the media but only sometimes. The main characters prefer to live like pirates, despite their profession being shown as something they're forced into doing by perpetual debt.

Those aren't even real spoilers! They're just bizarre, irrelevant details that contradict other important parts of the worldbuilding! Who was in charge of the continuity here?! The worst of it is that anytime a halfway interesting, non-contradicting detail comes up, it blazes by so fast that you completely forget it's there. Yoo Hae-jin plays a transgender robot. In general his performance is bad, largely because the motion capture technology just doesn't grab his unique mannerisms. But he definitely nails the transgender robot aspect of the character.

The special effects are also quite poor overall. The only genuinely good sequence is a late one that involves chain shanking a bunch of spaceships. Everything else is just generic space battles or stormtrooper massacres, with our actual leads played as so inconsistently buffoonish I seriously thought one late infodump was just misinformation from the bad guy. "Space Sweepers" is so awful it made me nostalgic for "Illang : The Wolf Brigade" and "Ashfall" which were also bad movies but at least they had original ideas and solid setpieces. "Space Sweepers" can't even clear that bar.