[HanCinema's Film Review] "Spellbound": Overcome your Fears one Date at a Time... 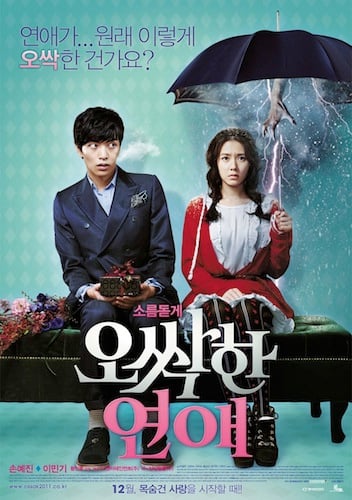 Hwang In-ho's 2011 romantic comedy "Spellbound" (Formerly known as "Chilling Romance" on HanCinema) had a tough time when it was released late last year. This quirky, and curiously attractive, little romantic comedy had to wrestle the likes of "Mission Impossible 4", which claimed more the 7.5 million admissions during its marathon run at the box office. Credit then has to be given to Hwang's playful and quaint twist on the romantic comedy genre and the film's ability to convince more than 3 million people in Korea that it was worth the price of admission.

Like any memorable love story worth renting, "Spellbound" comes down to science, specifically chemistry and, here, a twist of physics. Son Ye-jin plays the nervous and introverted Yeo-ri, who just so happens to be a living in a nexus between our world and the next. Ghosts often haunt her as well as those around her, forcing her into a loveless self-seclusion. She does this in order to protect those around her from the spirits that plague her. However, the stage magician Jo-goo (played wonderfully well by Lee Min-ki) forces her out of her comfort zone and awkwardly ends up discovering the daily horrors that surround her. Jo-goo must then decide whether or not to ditch her and run for his life, or stick around to face the fear.

Hwang had a great feel in the film for suturing suitable flecks of the horror genre into this unusual love story. Watching Jo-goo's goofy and naive character reacting to the threatening figures was quite amusing and well cut together for effect. Quick jumps and great make-up also added authenticity to the film's blond premise of overlapping cinematic domains. It is this creative mixture, the blending of the horror genre within the film, that gives it its allure and keeps the 'lightness' of the piece on its toes and the audience second-guessing. It's an unnervingly appropriate combination, or at least aptly whisked together by Hwang, that seems to enhance or 'zoom-in' on the central aspect of the 'rom-com'-Love and the challenges that get it to work.

Throughout the film there is the constant play between opposites, as well as the forces that exist between them. Yeo-ri's introverted and shy nature is countered in this magical world through Jo-goo and his own showmanship and proficient social skills. Their duo was nicely shaded and symbolised through the couple's role in Jo-goo's magic show. Yeo-ri is the victim of the 'dark magic' and her role/ performance ultimately ends in her crawling out from under the stage when the crowds have left. While Jo-goo finishes up the show above and is showered with praise from the crowd and his co-workers, Yeo-ri sits in this small and dark chamber under the stage, alone.

As the film progresses you will also see the shift in how the two characters react to their new connection to one another. Will Yeo-ri allow herself to share the burden of her curse with someone else? Does Jo-goo have the "guts" to accept her, flaws and all, and suffer through it? Questions like this, as well as actually a couple more surprisingly ones later, kept the film fresh enough, but by no means crisp, to make it all the way to its very familiar final moments.

"Spellbound" is not so much about the destination, but the seemingly fated journey of this clumsy and adorable couple. Throughout the film it is clear that the two have strong and unavoidable feelings towards each other, but other worldly forces hinder their exploration of those attractions. It's as much about letting your self be loved, as it is loving; a simple notion that Hwang incorporates through his blending of different genres and their themes. "Spellbound" generally keeps things light, self-reflexive and even bashful, and avoids gazing too deep into its interesting and creative use of horror conventions and themes. Great dialogue and character exchanges keep you invested in each scene, despite the fact that, if you actually wanted to, you could map out the rest of the plot yourself without much in the way of effort. "Spellbound" is also humbled by a few troublesome blemishes that scarred my memory of it, but Hwang In-ho swung me over to his side with some fun, unapologetic and fruitful layering of love on the darker side of life.