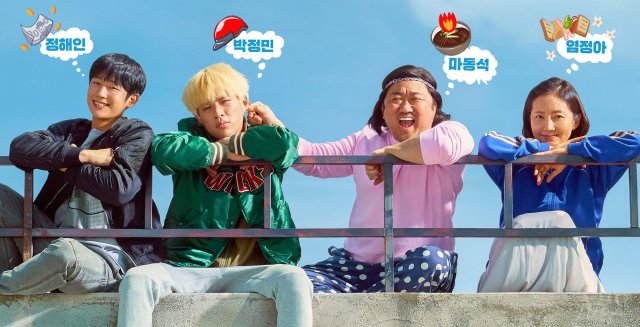 Taek-il (played by Park Jung-min) is a perpetually grumpy teenager who runs off to Gunsan to prove that he's independent. This worries his mother Jeong-hye (played by Yum Jung-ah), who runs a toasted sandwich shop in some unfortunately prime real estate. Meanwhile Taek-il's best friend Sang-pil (played by Jung Hae-in) tries to get a start in business, which goes poorly since his partners are literal gangsters. Back in Gunsan, Taek-il picks fights and loses them with an increasingly colorful bunch of characters.

There is entirely too much going on in "Start-Up", as there are far more characters than can be easily kept track of. I didn't even get into Kyeong-joo (played by Choi Sung-eun), an amateur boxer who's slightly younger than Taek-il and as a young woman, at a high risk of getting roped into illicit sex trade. This dark material initially makes for some of the movie's stronger setpieces, although Kyeong-joo's story is abandoned almost as soon as she joins up with the other characters at the black noodle restaurant.

That, incidentally, is where we meet Ma Dong-seok, a chef with suspiciously high-level combat abilities. For the most part this is implied rather than actually shown, as writer/director Choi Jeong-yeol simply assumes that we can infer that Ma Dong-seok is beating people up whenever the camera cuts away. Also the whole climax where Ma Dong-seok is getting into a fight with gangsters is edited into a completely different climax involving the toasted sandwich shop.

Neither of these climaxes, weirdly enough, have much to do with Taek-il's desire for independence. Like most of the plot beats in "Start-Up", there's an interesting idea. Taek-il expresses disdain for going to university when he could just try working and living right now. Taek-il is critical of his mother for working and sacrificing for the sake of her son rather than herself. But the sandwich shop issue actually ends up having more to do with Sang-pil's storyline, which I had trouble keeping track of mainly because he never interacts with any of the more obviously important characters.

"Start-Up" is based on the webtoon 'Start', and it's easy to see the influence. Not because I've read the webtoon, mind you, but because the gigantic cast of characters and interlocking storylines makes a lot more sense in a serial webtoon format than it does for a movie that's intended to be watched in a single sitting. Storylines are exposited and resolved very abruptly. I imagine for a person who's read the webtoon, the real-life recreations of memorable scenes from the webtoon would be more evocative.

But to someone without that context "Start-Up" is a jumbled mess filled with perplexing creative choices. The casting is chief among them. I had to keep reminding myself that Park Jung-min and Jung Hae-in were playing teenagers, because they don't look like teenagers in the slightest. Choi Sung-eun is slightly better in that regard lookswise, but I was still surprised to learn at the end that her character is apparently still high school age due to the way she acts.