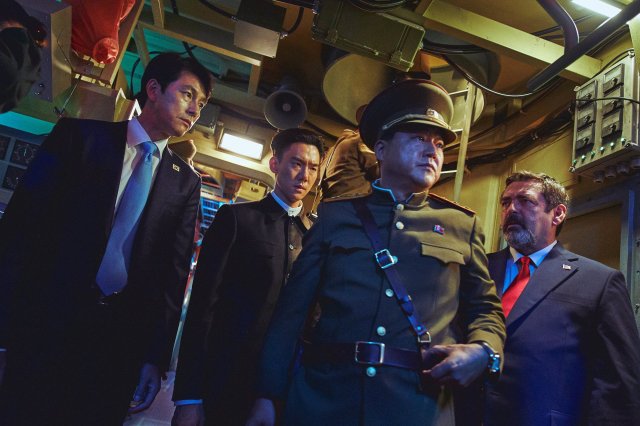 To give a sense of perspective, even though the nominal villain is North Korean submarine captain Cheol-woo (played by Kwak Do-won), the actual villain is Mori Shinjo (played by Hakuryu), the right-wing Japanese leader being introduced long before we see any North Koreans. To further add to the confusion a Trump analog is present in the form of President Smoot (played by Angus MacFadyen). Except he's played off as...kind of sympathetic?

Angus MacFayden's President Smoot is the kind of Trump satire you could only expect to see from non-Americans. It confuses Trump's rude reputation into the context of North Korean peace negotiations, where almost all domestic criticism Trump has faced for North Korean peace negotiations is that he's too nice. Sadly, writer/director Yang Woo-seok is under the impression that vaguely defined neo-cons are the main obstacle to peace on the Korean peninsula, when in reality American bloodthirstiness is not confined to them alone.

"Steel Rain 2: Summit" much like "Steel Rain" itself acknowledges this by having American characters blithely engage in needlessly destructive actions bringing the world to the brink of nuclear war. There's little self-awareness though. I was baffled when Cheol-woo continued to be played as the villain even after the reasoning behind his kidnapping three world leaders was explained. That context alone makes him about as sympathetic as the North Korean leader played by Yoo Yeon-seok and the South Korean leader played by Jung Woo-sung.

Despite being the alleged lead Jung Woo-sung is given surprisingly little to do. He can't even mediate arguments between the American and North Korean leaders since of the three he's the only one who can't speak English. Those cramped moments in the tiny locked submarine room are the best of the movie, emphasizing as they do the personality clash between the three leads. The black humor is more weird than genuinely illuminating though, as the parody versions of Donald Trump and Kim Jong Un are far more sympathetic than the real ones.

The resolution, too, is far more bombastic than it is logical. Where early summit scenes showcase the very real, borderline irreconcilable issues preventing peace talks, these are completely ignored in favor of a special effects laden happy ending. And for all the exposition we get about Chinese and Japanese involvement in the conspiracy I'm still not sure what anyone's plan was actually supposed to be except that it involved Dokdo. Speaking of which, there's an entire extended sequence wherein the Dokdo dispute is explained entirely in the abstract with no relation to the movie's actual internal continuity. There's a lot of scenes like that here, all of which are equally useless.