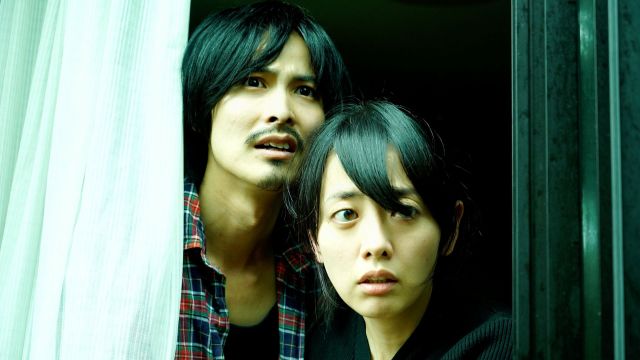 Several critical factors work against "STOP". There's the title, which is very generic, hard to remember, and search for. There's the fact that the production is almost an entirely Japanese one. And then there's the whole nuclear power allegory centered around the Fukushima nuclear disaster, which is oddly straightforward considering this is the latest film by writer/director Kim Ki-duk. None of this has anything to do with the actual quality of "STOP". I just think it's kind of funny how awkward context is apparently a larger barrier to the popularity of a Kim Ki-duk film than explicit genital mutilation.

So what kind of nuclear power allegory is "STOP" anyway? That's the most interesting question behind the film, because it's rather unclear. On the surface level "STOP" seems to be saying, pretty straightforwardly, that nuclear power is bad since it causes all sorts of crazy weird unquantifiable stuff to happen. Yet that much creates a dilemma. If the crazy weird stuff is unquantifiable, how do we know it's caused by nuclear power rather than hysterical reactions to it?

Consider how the plot gets kicked off by a mysterious phone call, at which point the lead characters start freaking out over extreme hypothetical situations and end up using the presence (or lack) of gory pictures to make major long term life decisions. It's like some bizarre backwards conservative satire about abortion, where creepy government thugs pressure women into getting unnecessary surgery by terrorizing them with suspicious behavior.

This tends to be played for laughs, although I'm honestly not sure to what extent this was intentional. The jokes in "STOP" tend to range from us wondering what exactly some characters are doing all tied up while other characters are going on train rides, to showing the one prospect that frightens camera owners even more than being attacked by nuclear radiated mutants. There's even product placement right in the middle of a late scheme to destroy capitalism.

Mild spoilers- the plan to destroy capitalism doesn't actually make any sense, even in context. Which to me was part of the joke- hysteria isn't actually useful for trying to jumpstart major changes, because hysterical people tend to latch on to the first stupid random plan they think of. And what do you know, that pretty much never ends up working. Even if nuclear power is this huge bogeyman, it's not something that can be destroyed overnight by ad hoc terrorism.

That's the standpoint from which I see the ending, where it turns out the ultimate consequences of the Fukushima disaster, while bad, are nowhere near as terrible as what had been hypothesized over the course of the movie. What's more, the punishment is almost certainly an ironic one with no basis in science. In a world where any random utterance about nuclear power seems to be a premonition about an ominous horrible future to come, what worse punishment can there be than for a person to just interpret any utterance with that same level of fear? It all makes for intriguing thematic material, which is why I can easily recommend "STOP".