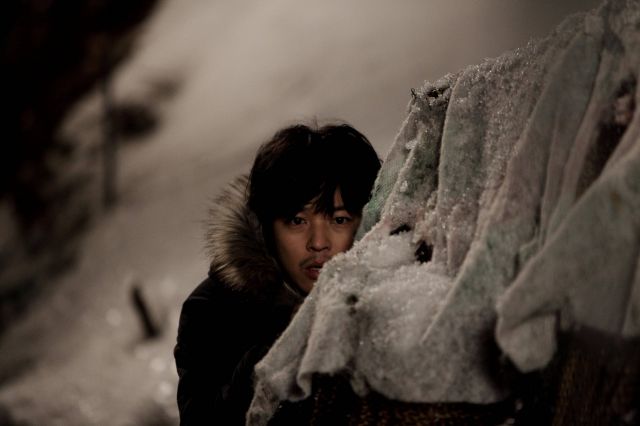 What makes this movie particularly annoying is the perspective character, Yoon-joon (played by Kim Jeong-hoon). There's nothing especially grating about the person specifically or Kim Jeong-hoon's performance. The problem is that, by any reasonable definition, this movie is really about Jeong-in (played by Cha Ji-hun), the woman who actually has all the problems that need to be solved. Yoon-joon's appearance, first as an observer then as a rescuer, sours and makes a mockery of Jeong-in's entire situation.

This is because while all the narrative itself is wrapped up in Jeong-in's problems, from an emotional perspective we in the audience are actually identifying with Yoon-joon's character arc, which for the most part just boils down to learning that rape is a bad thing. This is not an interesting or insightful revelation. The rapists in this movie are for the most part comically evil and impossible to sympathize with. They're too extreme as people to be sensibly viewed as emblematic of society's problems with rape as a whole.

Characterizing them in this way almost brings "Stray Dogs" close enough to just being typical revenge thriller stuff, but the way the film is framed doesn't work for this interpretation either. Yoon-joon's character arc is about redemption, not revenge, and while Jeong-in certainly gets her shots in at her tormentors, she is never at any point plausibly the main character. And again, for the first part of the movie, the rape stuff is treated as being a really big deal. It's voyeuristic, extreme, and thus horribly ineffective as a social message, but still. This is the argument "Stray Dogs" is making. Poorly.

The only bright spot I can find here is the way some of the villains die. Each of them has their own little quirk that seems to be really dangerous but in realistic terms really hamstrings their effectiveness in the fight. One of the men makes a big deal of the fact that he doesn't care about pain, and will make himself bleed just to prove a point about how much he doesn't care. He finds out that looking and acting like a badass doesn't magically make a person immune from certain biological needs.

There's something to be admired about the faceoffs here. The various confrontations with the villains all have their own different punctured ends that are worth something at least for making them come off as individuals rather than a generic mob. But the simplicity of the narrative coupled with a general disregard for logistical rules of engagement drain most genuine tension out of these scenes. At one point an old blood trail in the snow becomes a plot point- later on characters chasing each other appear to be scouting at random, catching, losing, and recatching their intended targets by virtue of sheer dumb luck.