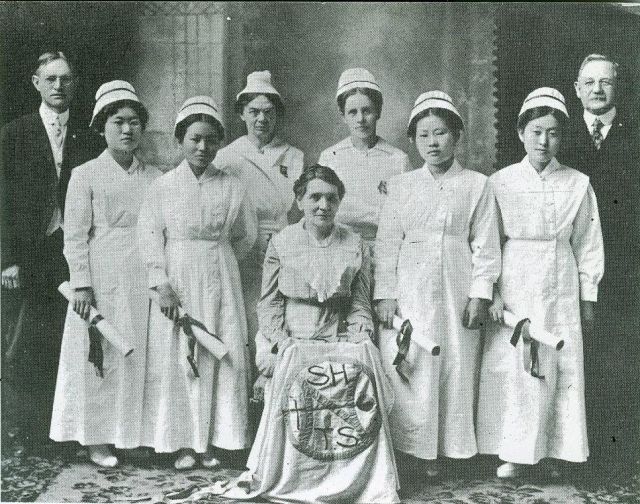 Elizabeth Johanna Shepping's mother came to the United States in search of opportunity. That did not end well. After a disaffected childhood where she was used to having no friends, Shepping eventually moved back in with her mother and stepfather, only to have a falling out over religious differences. In her quest for salvation, Shepping eventually settles upon colonial Korea as the outlet for her work, adopting the Korean name Suh Pyoung in order to better fit in.

It's quite an appropriate title- literally meaning something like "reading instructor", Suh Pyoung made it her life's work to teach as many people as possible, particularly women and orphans, how to read. Hence the religious falling out with her Catholic mother, who did not see direct understanding of Scripture as relevant to salvation. But with every step Shepping makes in Korea, her ideals are vindicated. The people there need her.

"Suh-Suh Pyoung, Slowly and Peacefully" makes frequent use of dramatic flashback (with Anna Rihlmann as the title character) in order to emphasize the personal touch behind Shepping's motivation. At times this is cheesy- I'm thinking in particular of one scene where this guy with a sinister looking moustache talks about the need for good missionaries to do good work overseas in the sad pathetic land of Korea. The guy says his lines in such a way as to make it sound like he's making the story up for sinister reasons.

Or is that just my general cynicism talking? "Suh-Suh Pyoung, Slowly and Peacefully" is a markedly hopeful documentary, with a clear-throated passion for good work that's sadly in short supply these days. Even though Shepping is portrayed as being in constant poor health, her emotional bond with the people she assists as Suh Pyoung is so powerful that Shepping does not appear sick at all. When "Suh-Suh Pyoung, Slowly and Peacefully" gets to Shepping's mandatory sabbatical, it's well noted how, having found her calling, the United States no longer feels like "home" to her.

Is it possible that "Suh-Suh Pyoung, Slowly and Peacefully" is exaggerating some of the woman's more angelic qualities? Sure- but the documentary is fairly meticulously researched, going into Shepping's letters as well as everything known about her from the relevant missionary archives in the United States. Besides that the narrative directors Hong Hyeon-jeong and Hong Joo-yeon come up with is quite plausible. It makes sense that a woman who felt unwanted and unloved as a child would be so single-minded in her determination to help others avoid a similar plight.

There's also history as a guide. South Korea has a very strong Christian culture- strong enough to bankroll documentaries like this one, anyway. And women like Suh Pyoung were a big reason for that. They came to Korea, not for enrichment or personal gain, but because they were compelled to by the power of their faith. Those kinds of good deeds leave a strong, long-lasting cultural memory far after women like Suh Pyoung herself pass away and are forgotten. I am glad, though, that "Suh-Suh Pyoung, Slowly and Peacefully" brought her accomplishments to my attention.