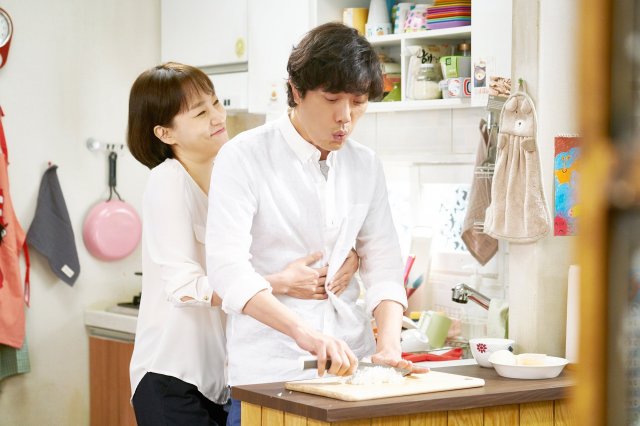 In the opening scenes of "Sunkist Family" Jin-hae (played by Lee Go-eun) expresses annoyance to her grade school semi-boyfriend Dong-sik (played by Im Han-bin) that her parents are fighting. Dong-sik is skeptical about the viability of their Jin-hae's parents, suspecting they're on the verge of divorce. Jin-hae grumpily asserts that everything goes back to normal once her parents start making the thumping sounds. Which does happen, and which Jin-hae graphically depicts in her grade school art class.

"Sunkist Family" is noteworthy mainly for being an aggressively sex-positive film without ever at any point being particularly pornographic. Jin-hae's dad Joon-ho (played by Park Hee-soon) is encouraged by his youngest daughter's artistic talent while he himself had to take a regular job as a butcher. Jin-hae's mom Yoo-mi (played by Jin Kyung) teaches screenwriting at high school and clearly enjoys sex yet has moments of doubt because of her supposedly puritanical ideas regarding the kinds of stories teenage male students like to write.

Cheol-won (played by Jang Sung-bum), Jin-hae's much older brother, is in his twenties and sexually inexperienced- though not for lack of trying. Jin-hae's somewhat much older sister Kyeong-joo (played by Yoon Bora) is having angst because she still hasn't started menstruating. No one is ashamed of any of these hang-ups, and openly discuss them with each other. The frank sexual discussion in "Sunkist Family" is the main source of the movie's humor, all while being surprisingly child-appropriate.

The very curious paradox of "Sunkist Family" is that while the characters themselves consider sexual dysfunction to be entirely unremarkable, the movie is only really funny if the viewer recognizes that such discussions are typically far more awkward. There are, admittedly, some decent comedic setpieces in here. The bits where Jin-hae interprets her parents' relationship in terms of paranoid child logic are excellent, as are the scenes where Cheol-won imagines himself showing off sexual dynamism contrasted with what actually ends up happening.

Most of the other story beats are weaker. Park Hee-soon and Jin Kyung have, somewhat counterintuitively, excellent chemistry as the constantly bickering lead couple that's always making up with sex. Yet the very cyclical nature of their conflict just makes their inability to demonstrate self-awareness come off as horribly petty. Relatable, to be sure, but not exactly the kind of story that feels like it needs exposure in cinematic form.

"Sunkist Family" is basically a feature length situation comedy. It almost comes off like a pilot for a television show- except by the end most of the ongoing conflicts have been basically solved, not that it took much effort to do so. Just a single straightforward conversation is enough to clear up all the relevant misunderstandings. I was cheered, somewhat, to understand that Jin-hae's fundamental childlike faith in her parents to clear up overreacted misunderstandings via a healthy sex life was validated. But I was not especially impressed, so whether or not you want to watch "Sunkist Family" is largely a function of whether you're in the mood for casual entertainment or something more ambitious.